If you’re new to licensed LEGO action-adventure games both movie-based and otherwise, then congratulations—you’ve somehow managed not to play any of the 17 games released prior to LEGO Marvel’s Avengers. These include:

That’s 17 games that all play the same way. Popular characters in the form of LEGO minifigures run, kick, punch and jump through levels inspired by the movie or comic book series from which they spawn. Levels are littered with puzzles requiring the skills of particular characters to overcome. Each game is packed with unlockable characters, collectibles and humorous references to the source material. Since the games are built with parent/child play in mind, characters never die—they just respawn endlessly.

More than a decade’s worth of games, all basically playing the same. Developer TT Games has tweaked the formula here and there, adding vehicles, a dynamic split-screen feature that kicks in when two players get too far from one another, and open worlds to wander about between gameplay levels, but pick up 2005's LEGO Star Wars and—graphics aside—it basically plays the same as 2016's LEGO Marvel’s Avengers.

If you’re new to the LEGO games you’ll likely be delighted. Seeing familiar characters re-imagined as tiny plastic figures for the first time is a real joy. Watching them waddle about smashing pieces of scenery to collect LEGO bits is a hoot. You’ll find the way the developers take existing movie dialogue from The Avengers and Avengers: Age of Ultron and transform it into comedy gold hilarious.

It’s a perfect game to play with your children. The movies’ darker bits—character deaths, sterilisation and such—are either rendered kid-safe (one character is covered in ice cream instead of killed) or glossed over completely.

I got really nervous here.

For those of you not new to the LEGO Games, you know what to expect. Two movies and change (there’s a Captain America: The First Avengers flashback in story mode) worth of LEGO-fied game levels, a handful of side missions based on some of the other Marvel movies (Iron Man 3, Thor: The Dark World, The Winter Soldier) and a bunch of free-roaming exploration to do after the credits roll.

Yeah, even the little kid from Iron Man 3 is playable here.

2013's LEGO Marvel Superheroes was praised for giving players a vast open-world toy version of New York City to romp around. LEGO NYC makes a return this time around, packed with more quests, random crimes and 41 different characters to collect.

Initially the idea of more hours of wandering through the city didn’t seem all that exciting, especially after noting some of the locations were carbon-copies of what we saw in the previous LEGO Marvel game. Thankfully TT Games has upped its side quest game this time around, and helping obscure characters complete ridiculous tasks in order to add them to my collection is a lot more entertaining this time around.

And it’s not just New York City we get to explore this time around. Several new locations are available in this world and beyond. South Africa, Barton’s Farm, Stark’s Malibu Dream House, Washington D.C., Made-Up Ultron Country, Asgard and the S.H.I.E.L.D. base from the first film are all available for exploration, each with 10 characters to unlock and various puzzles to solve.

If you’re keeping up with the math, that’s 111 (70 plus 41) characters to unlock outside of story mode, including some incredibly deep cuts. I’m talking characters so obscure I had to look them up. Even our resident comic book expert, Evan Narcisse, wasn’t sure he knew who this guy was:

And now I’ve got to read the entire Avengers Initiative storyline from the comics.

If you’ve not got kids to play with and you’re getting tired of the LEGO video game formula, Marvel fan service is all LEGO Marvel’s Avengers has going for it. But damn if the fan service here isn’t exquisite. Lovers of both Marvel Comics and the Marvel cinematic universe will constantly be finding things they’ll want to share with like-minded friends. I sent Evan Narcisse at least a half-dozen screenshots in squeeing fashion this morning alone.

Here, I shall share them. The first one was kind of strange.

I call this next one “Murica.”

This one raises interesting questions about MCU Quicksilver versus comics Quicksilver.

This is exactly Ms. Marvel, and I sorta want to read that fan fiction.

The Marvel love even extends to the TV side of the MCU, with plenty of deep references that only fans of shows like Agents of S.H.I.E.L.D. will get, like the shot I posted the other night and comments Agent Coulson makes as you’re wandering about the free roaming areas. “Thanks for lending us a hand, not that I’ll need an extra hand any time soon.” If that line made you laugh, then you’re in the right place.

With the game’s story mode behind me I’m basking in the comic book nod afterglow, rushing from open world area to open world area, madly hunting for old friends to add to my roster. That said, the fact that the licensed LEGO formula hasn’t changed much in a decade does not escape me. 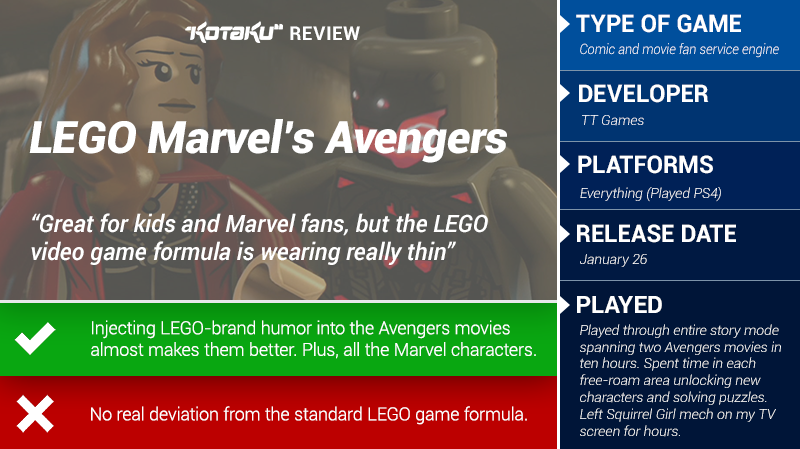 I stopped trying to collect all of the gold bricks and mini-kits in LEGO games years ago. I’ll start off attempting to reach ever stage’s LEGO bits goal, but within a couple of levels I stop bothering. Swapping between characters to complete optional puzzles for collectible things has lost its luster. I’m excited when I start playing a new game based on a property I love, but the spectre of eventual boredom hovers over every moment.

I’m enough of a fan of both the toys and the fiction represented in LEGO Marvel’s Avengers to eke out plenty of good times before the inevitable ennui sets in, but the LEGO formula is wearing awfully thing. Small additions like two characters being able to combine their powers into flashy team attacks just aren’t cutting it anymore.

Fan service can only carry a game so far. With two Marvel games under its belt, TT Games is quickly running out of clever references to distract me from the fact that this series is essentially a glorified toy advert.