Lately I’ve been playing a lot of Rainbow Six Siege. It’s really good, but I’m not feeling very optimistic about its long-term prospects.

Siege, like any multiplayer game, will only thrive if it can form a lasting community of players. My pessimism regarding its chances to do so is the same pessimism that was eventually borne out by similar games like Titanfall and Evolve. It’s also the same pessimism I feel about Star Wars: Battlefront, to an extent.

All of those games launched at a traditional big-budget video game price point of somewhere just either side of £50. Like the other ones, Rainbow Six Siege (despite having an invisible wood splinter of a single-player component) is mostly a competitive multiplayer game.

Old-school publishers like Ubisoft, EA, and 2K are employing a distinctly old-fashioned way of doing things, especially in this era of free-to-play multiplayer juggernauts like League of Legends and DOTA 2—or even cheap content-stuffed shooters like Counter-Strike, a complete collection of which can be bought from Steam for £23. In the long run, the circa-£50 price point doesn’t help publishers or the players they’re catering to. It stops communities from growing, which makes it damn hard to build anything that’ll last.

The problem with approaching multiplayer games in this way tends to compound on itself. Because of those initial price barriers, games’ communities crawl out of the gate small and emaciated. When new players decide to see what the (sadly minimal) fuss is about, they have trouble finding matches to play in — especially as time goes on, and especially against players of their own skill level. So, even curious newcomers don’t stick around long.

On top of that, the high entry fee is usually only the beginning. Lately, publishers have been trying to get the best of both the old-school single-transaction retail world and the brave new microtransaction world, and the result can feel like a raw fucking deal. Let’s look at Star Wars Battlefront. It’s an almost-multiplayer-only game that launched at £49.99, and it’s got a £40 season pass attached to that like a Snowspeeder cable to a pair of clumsy AT-AT legs. Ninety quid for a single game, up front? That’s a hell of a commitment, given that the servers could be ghost towns by next June. 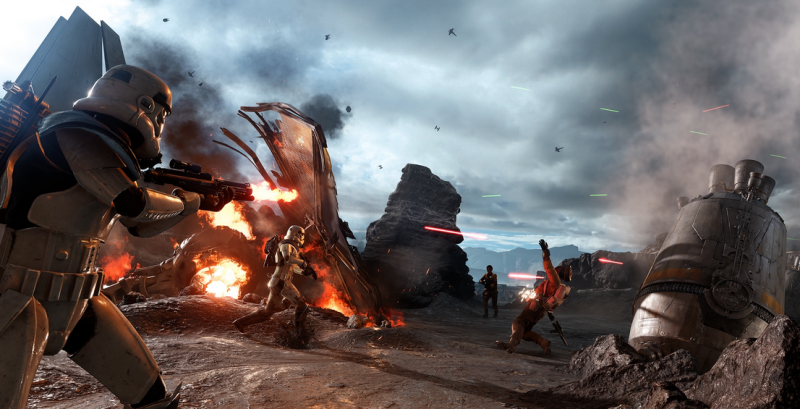 Same thing with Rainbow Six: £55 for the game, and £25 for a season pass, along with an (optional) money-based unlock system. On top of the added cost, season passes often gate portions of the community from playing on certain maps, fragmenting already shrinking player bases and making it harder to find matches. Wanna keep up with what the community’s playing? Better get ready to spend, spend, spend, and even then, your next multiplayer lobby could be barren

The downsides to this approach (still) don’t end there. In a free-to-play “games as service” environment like, say, League of Legends, at least the stuff you buy is yours to keep — well, until the servers forever shutdown or the sun explodes, anyway. In many £55 triple-A series, there’s a solid chance a sequel will drop in a year or two, requiring you to a) lose your precious progress and start mostly from square one, b) spend over £50 again, and c) stump up for another one of those damn season passes.

I’m not saying that DLC is inherently bad; far from it. The practice of selling post-release content – the heavy rain of DLC, season passes, and microtransactions — can be crucial to the ongoing funding of big game studios. But by using outdated methods to release games and sell DLC, and in particular by sticking with that £55 price of admission, publishers risk doing serious harm to the long-term viability of their multiplayer-only games. That really sucks. I want more people to play Rainbow Six Siege with me, but I’m already finding it hard to convince them.