The Wilfully Unemployed of Japan Have Their Own Mecha Manga

It’s a dystopian future where the world is dominated by the rule of work. Those who commit their lives to their jobs to become brainwashed drones are treasured and those who would be parasites, living off the hard work and resources of the working population, are hunted down and forced to find their place in the labour force.

Neetenberg is a mecha comic that has been getting traction in Japan due to its parodying of the Gundam franchise but with everything reduced to a war between the wilfully unemployed of the Jobless Alliance and the oppressive corporate slaves of the Indentured Employment Army.

For those unaware, NEET is an acronym for “Not in Education, Employment, or Training.” Basically, someone who is wilfully unemployed. Japan is currently facing the problem of a large population of individuals with no motivation or interest in joining the general work force.

The story follows the young protagonist, Yu Fudo (遊 不働), a character whose name literally means “Play, Unable to work”. An unemployed slacker, Yu’s life is turned upside-down when one day he is captured by the Indentured Employment Army, a.k.a. the Death March Army. Yu is in the process of being sent to labour camp when he is rescued by the Jobless Alliance, a.k.a. the Riga Jobless. Yu quickly finds himself the pilot of the Riga Jobless’s prototype mech, the Neetenberg. It turns out that Yu is a fabled N.E.E.T. (Next Evolution Exceed Type), an evolved human, and one of the only beings capable of powering and piloting the Neetenberg.

Manga translation: “I believe that to work is to admit defeat!!” “Very well! Then go dig a hole behind the factory!!”

The manga’s biggest selling-point is its infusion of unemployment and business buzzwords interlaced in a template Gundam storyline. There’s a rival masked pilot named “Worka Holic,” the mechs are called “Workmen,” and every chance the manga gets it has characters yelling Gundam-esque lines at each other during battle which has had fans on the internet eating it up.

Because it follows a template storyline, aside from the constant barrage of buzzwords and work-related jokes, Neetenberg is quite entertaining but at the same time very predictable. But the added layer of humour makes it an amazing parody piece. In the current Japanese work environment of increased NEETs and “black” or “sinister” corporations (ブラック会社), it’s also exceedingly topical, with a young generation fighting against the out-of-date corporate slave-like expectations of an older generation.

Manga translation: “I’ll show you the power of a true corporate slave.”

The manga is currently ongoing with two volumes out, and shows no sign of running out of steam or buzzwords to mine. Volume two introduces a trio of soldiers whose names are derived from energy drinks popular among overworked businessmen, as well as a genetically engineered corporate slave with superhuman powers...

Due to the high number of topical business in-jokes, Neetenberg will probably be an utter nightmare to translate, and even if it is, much of the humor will be lost in translation or completely fly over the head of someone not in on the jokes. That said, if you are fluent in reading Japanese, and are somewhat business-savvy, and are a fan of the Gundam universe(s), Neetenberg will not disappoint. 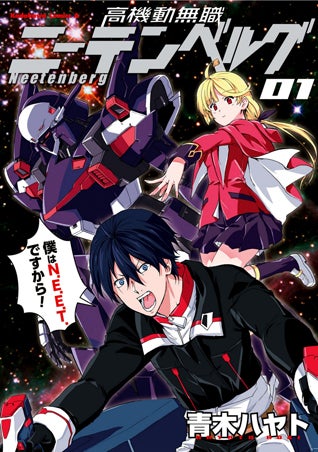