Overlord is a Magnificent Power Fantasy

You’ve heard the story before: guy gets stuck inside fantasy world. Guy tries to get back to real world. But why even try to go back when you’re a skeletal badass with fanatical loyal minions at your command?

This past season had a lot of strong series. Among our favourites was the fantasy series, Overlord, the story of a high-level MMORPG player who, after the game ends its service, finds himself trapped inside the game world and the NPCs he and his former guildmates created have gained sentience.

Right from the start, Overlord brings up a very relatable theme for anyone who has played an MMORPG before: your favourite game being abandoned. The protagonist, a player who goes by the name “Momonga” has been a devoted player of the virtual reality MMO game, Yggdrasil, and after investing days, weeks, and even years of his time building his skeletal character, his guild, and his realm into one of the most notorious in the game, he finds himself alone with his world coming to an end—a world he has grown to love more than the real world that awaits him outside of the game. So when the time comes to pull the plug on the servers and he finds himself trapped inside this new reality, he seriously contemplates the question; if he could go back to the real world, would he even want to? 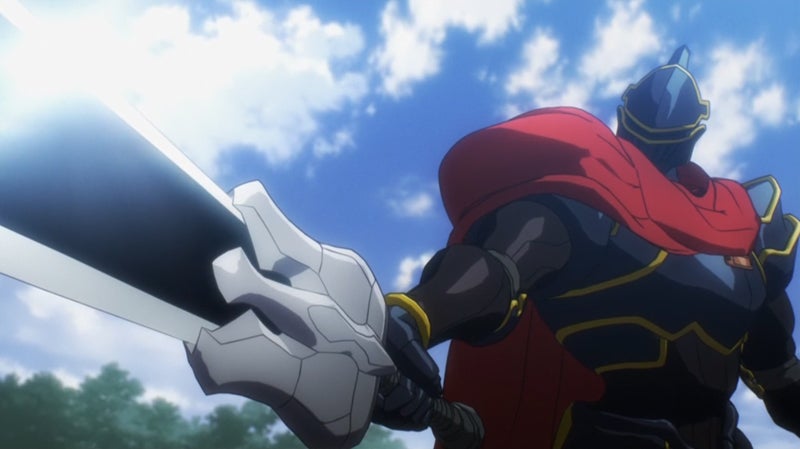 From that instant, Momonga embraces his new existence as a skeletal being and never looks back. After that, the series takes off and becomes a train ride to fun town with exploration into the workings of this new world—the rules and limitations, and how mechanics from the game world carry over and work in the new reality. As a maximum level player, Momonga is insanely powerful, capable of commanding forces that are simply put, godlike. And yet, he never gets intoxicated on his own power. Throughout, Momonga remains cautious and analytical like any intelligent person in his position would be. This adds to the reality of his character and makes his overwhelming victories all the more entertaining. 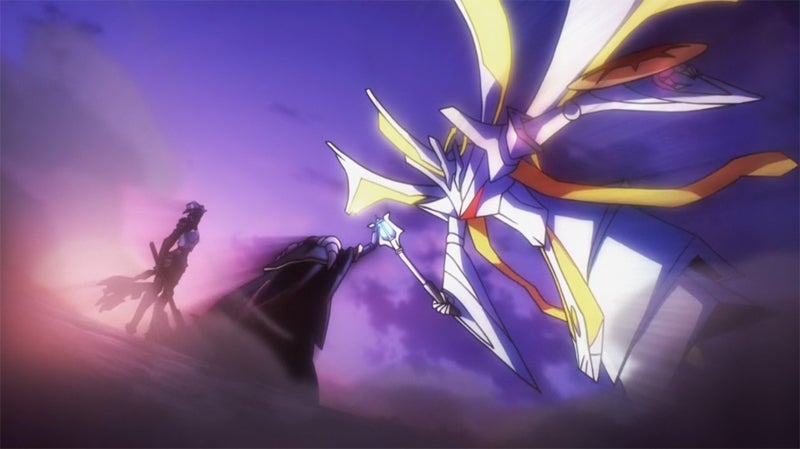 While Overlord is not an “adolescent” power fantasy, it is certainly a power fantasy. Always erring on the side of caution and holding no punches to obliterate his enemies, Momonga is genuinely entertaining to watch as he moves about like a force of nature. Yet unlike other characters we’ve seen before with deus ex machina-level power his human side keeps him relatable and interesting. Right from the beginning, we are shown that Momonga is damaged goods. He found a world he loved and true friends to share it with, only to have them all abandon him and everything they had made together. He has difficulty forming bonds with people for fear they will leave him so he keeps everyone at arm’s length. And the moment anything or anyone he begins to feel even the slightest connection with is taken from him, his wrath is brutal and unforgiving.

While inside, Momonga has the mind of a human, as a character from a game, he has the body of a skeleton—although considering his power level, the description “lich” would be more fitting. Almost immediately we see that he has no problem in his role as an undead creature of the damned. In fact, he embraces his new existence with open arms, which is understandable—as he has spent countless hours playing a creature of evil, it’s not much of a leap for him to actually be one. However, he is not pure evil. On a Dungeons and Dragons scale, you could place him firmly in the category of “Lawful Evil.” Evil, but with honour. This dynamic of a being of darkness with a human soul makes Momonga much more multi-faceted and interesting to watch throughout. 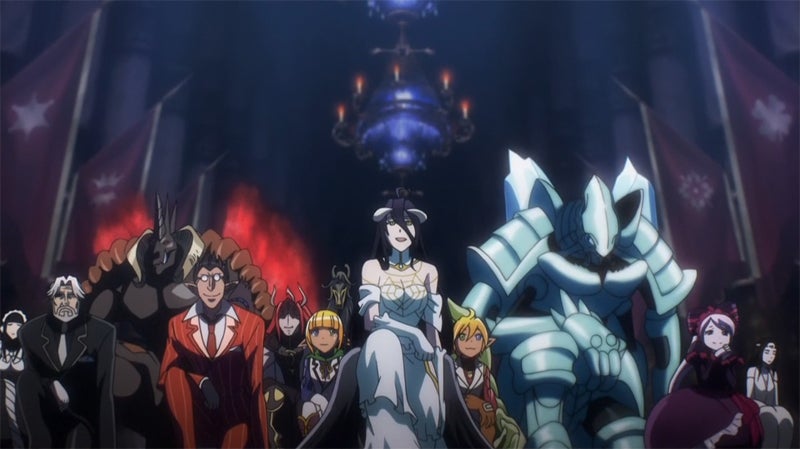 The other characters in Overlord are equally entertaining to watch, especially Momonga’s minions—most notably, the second in command yandere character, Albedo. Created by Momonga and his guildmates as AI-driven NPCs, when the world of Yggdrasil shuts down and they remain, they all gain sentience. In addition to sentience they all bear an undying devotion to Momonga as the only one of their creators who has not abandoned them. This leads to endless moments of entertainment when they will praise him and quarrel over who is more devoted. 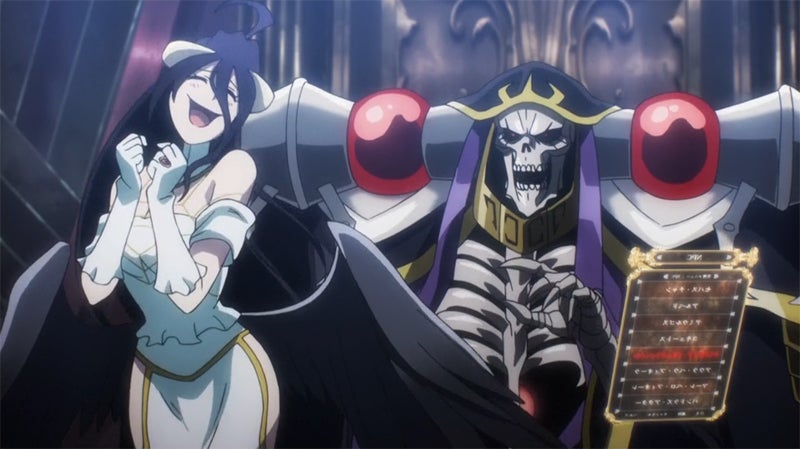 While on the character side Overlord is a joy to watch, it does fall a little short on the story side. Outside of exploring the new world Momonga finds himself in, there’s very little in terms of plot and story development. In fact, Momonga’s character is so interesting and charismatic that the story becomes downright boring the minute the spotlight is no longer on him. The series for the most part ends on very weak note with semi-promisings of exciting things to come if they ever get to make a sequel series. 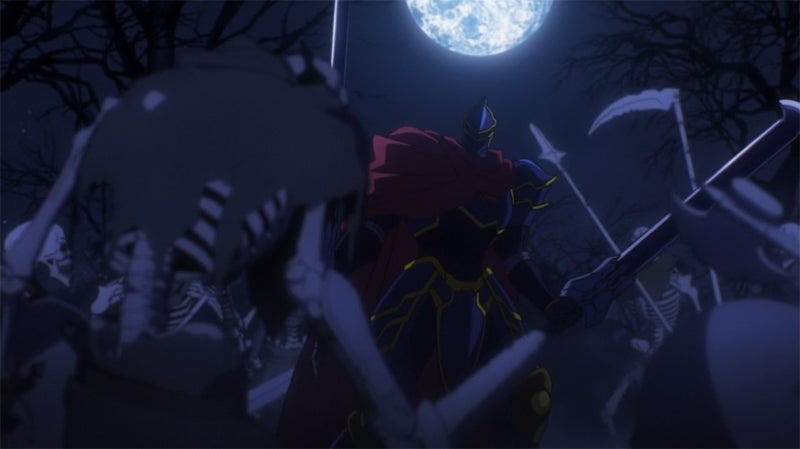 Regardless of a somewhat weak ending, Overlord remains one of my favourite anime this year. Despite any weakness in plot, the series more than makes up for it with an entertaining setting and fascinating characters that I never got tired of watching. I had so much fun that after watching an episode, I would immediately go back and watch it again, not to see if there was anything I had missed, but simply because I had had so much fun. The anime is based on a novel series that is ten volumes long and still ongoing, so there’s more than enough content to mine if they are ever to make a sequel. I for one could not get enough and would be more than happy to return to the world of Overlord, if not live there. 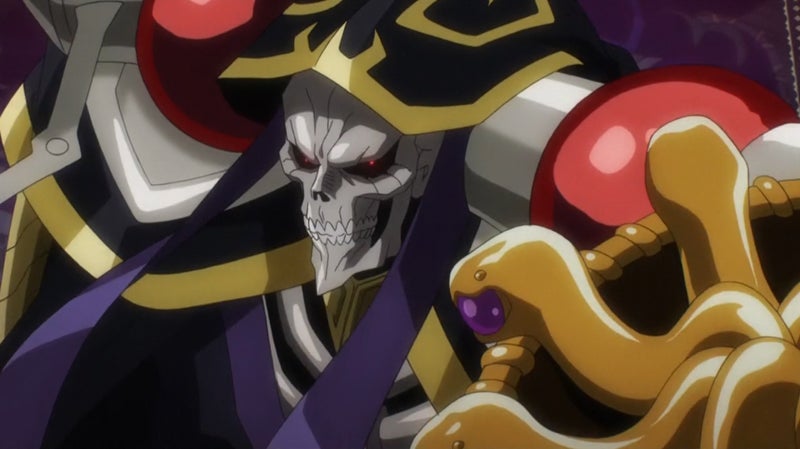 One additional note of interest is the fact that the main character’s name, “Momonga” means “flying squirrel” in Japanese. This is a play on the fact that the character was a game avatar in an MMO, where players will name their characters serious or ridiculous names. This makes for moments of hilarity where you will have characters worshiping the ground he walks on and you realise they’re all essentially saying “praise Flying Squirrel” without an ounce of insincerity (along with the other moments of serious hilarity). 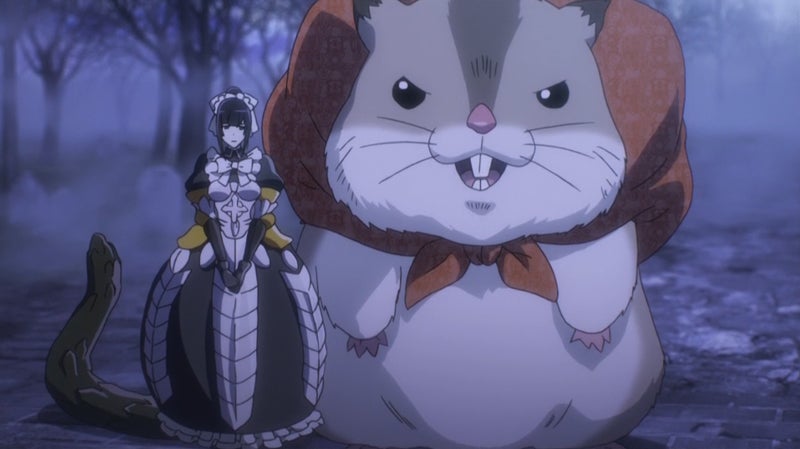