Launching early next year with 14 construction sets, a mobile app and an animated series, LEGO Nexo Knights mixes classic knighthood lore with futuristic technology. I need this. I need this a lot.

LEGO’s had a run of good luck with its original IP lately, but for every wildly popular Chima or Ninjago there’s a Galaxy Squad or Ultra Agents, themes that seem to come and go with little fanfare.

Nexo Nights won’t be one of those quietly fading themes. Not when it has a knight on a robot hover horse. 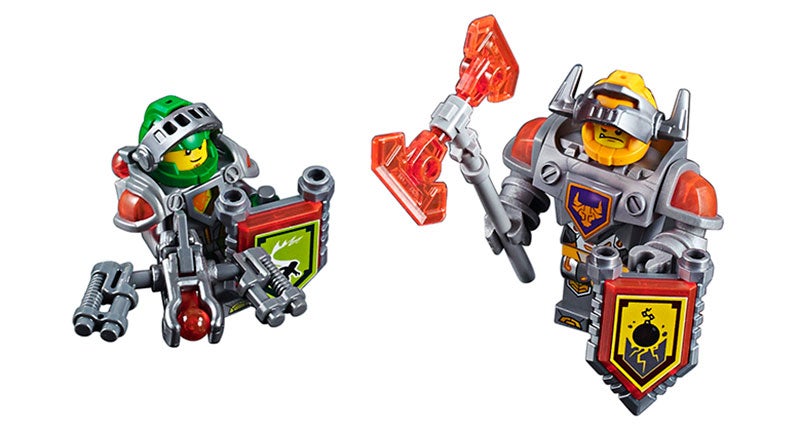 Nexo Knights tells the tale of a young group of new knight recruits battling against a king’s jester corrupted by the power of...well, of the Necronomicon. I’m sure they aren’t calling it that, but look at it.

That’s the Necronomicon right there. Maybe the LEGOnomicron.

Overcome by the power of this dark tome that is probably not the Necronomicon, the dark jester, AKA Jestro, summons a horde of vile creatures to attack the kingdom. It’s up to the Nexo Knights to defend the innocent from Destro’s evil schemes using only their wits, powerful technology, a holographic Merlin and a mobile castle that rolls on massive tank treads.

It’s called the Fortrex, and it’s one of the building kits coming next year.

Jestro, not to be outdone, counters that beautiful thing with this monstrosity.

Obviously I’m quite enamored of the futuristic knight theme. With only a couple of product shots and a trailer for the upcoming series my imagination is already running wild.

The LEGO Nexo Knights playsets will arrive early next year, with the show debuting potentially as early as this December. I’m looking forward to (looks around room) buying a lot more shelves.