There's probably only one comic this year that will feature a training montage with a mallard trying to sneak his tailfeathers under a laser. Yes, it's Howard the Duck. Yes, you should read it. 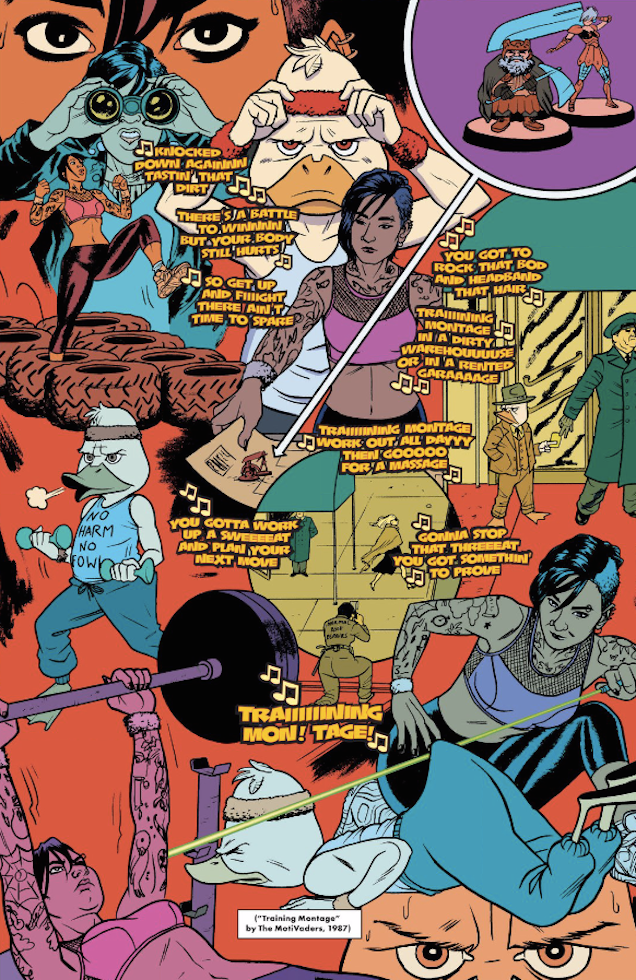 Of all the new comics series that Marvel is launching in the upcoming months, Howard the Duck feels the most counter-intuitive. This is, after all, a character most famous for being at best an oddity and at worst a failure.

To most people, Howard the Duck is probably best known as a costly big-budget Hollywood flop, a cautionary tale about the kind of risk and ridicule that could rain down on those daring to make a comic-book movie. Things have changed, of course, what with Marvel's self-produced movies generating blockbuster business and rabid enthusiasm for years now. And even though Howard made a surprise appearance at the end of the Guardians of the Galaxy movie, taking a bet on him as the leading character in a new series feels risky.

Even for those who know his comics publishing history can't do more than call Howard a cult favourite. His runs have always flown under the radar, populated with old-school 1970s storytelling, weird crossovers and clumsy attempts at reinvigoration. The original comics—written by Steve Gerber with art by Val Mayerik, Frank Brunner and others—introduced a character built on an absurd premise: what if a talking animal—like the ones in Mickey Mouse, Underdog and Bugs Bunny cartoons—came to the "grounded" reality of the Marvel Universe.

Throw in angst, mild social satire and an overarching love of tweaking genre tropes and the recipe for one of Marvel Comics' weirdest characters was born. The most fascinating thing about the original Howard comics is the amount of genuine emotion that filters through their broad comedic plots. He always rants about how the odds are stacked against him. Hell, one of his adventures starts with him trying to commit suicide.

To me, this inquietude marks Howard as a creation of the 1970s, a decade when America couldn't puff itself up as easily as it once did. Comics writers weren't celebrated the way they are now and you have to wonder if Gerber was chafing at the anonymity and snobbery he might've endured during this part of his career. Despite the unexpected pleasure fans got for Howard, he was always the oddest duck in Marvel's character catalogue.

So, yes, Zdarsky's got a serious uphill battle. But, he's one of the best humorists working in comics today. He's half of the team behind the raunchy hit Sex Criminals and has a long history of comedy writing, some of which can be seen in his Monster Cops and Prison Funnies projects. His take on Howard leans in on the idea that this duck isn't supposed to fit in the 'real world' of Marvel Universe, even though it's chock full of its own weirdnesses.

This time around, Howard's not just a duck trapped in a universe that's not his own. He's also a waterfowl who's slightly out of step with the times, fitting for a superhero riff on the Donald Duck recipe.

As written by Chip Zdarsky, Howard's an old-fashioned throwback. The way he dresses, talks and interacts with other characters are all hallmarks of a more hardscrabble era when bruised feelings weren't necessarily a concern for folks. Even his profession of private investigator is one that seems linked to an old-school romantic notion of what it meant to find justice.

With a simple setup that has Howard investigating a lost heirloom necklace, Zdarsky and Quinones take Howard on a tour of familiar faces, with a supporting cast appearance by She-Hulk and a hilarious cameo by Spider-Man among the highlights.

The art by Joe Quinones in this first issue is stellar, using just enough lines to render weight and realism but still flexible enough to channel an affable cartoon aesthetic. Howard winds up in jail and in trouble with the law in this issue and, in keeping with tradition, it feels like meta-commentary on how fans might think of him. He's not just a comedy character or the butt of a joke. He can go anywhere and often does, winding up in cosmic battles or romantic entanglements opened up by creators clever enough to make them ring true.

Howard the Duck exists in a fictional landscape where grimdark, emotionally tortured superheroes are still very much the order of the day. It seems goofy to believe that he'll ever get dusted off for another chance for cinematic success, other than maybe being part of an ensemble in, say, Guardians of the Galaxy 2. He's an outlier, for sure, one that harkens back to Borscht Belt-to-Rodney Dangerfield comedic legacy that some readers today might have never even heard of . But it already seems like his new handlers understand that the most fun a talking duck can have is heckling all the spandex crimefighters from the sidelines. Welcome back, Howard. Try the veal while you're here. Who knows how long you've got.