Dying Light Isn't a New Fallout, But It'll Do For Now

Truth be told, I wasn't expecting much out of open-world zombie-slugger Dying Light. I didn't care for its predecessor, Dead Island, and I figured this one would be more of the same—but with sweet parkour moves. And yet, here I am, hopelessly addicted. I blame Fallout 3, one of my favourite games of all time.

Broader similarities between the two games are obvious: both are apocalyptic in nature, both are open-world, both are pretty enormous. Heck, both even have zombies... of a sort. But then you hold a magnifying glass up to the little things, and you find all sorts of commonalities that are downright eerie. For instance, there's the way the camera pulls in on characters that are talking at you, and the world around them grinds to a complete halt, as though listening to a Shakespearean soliloquy in awed silence (except the writing is a bit crap). 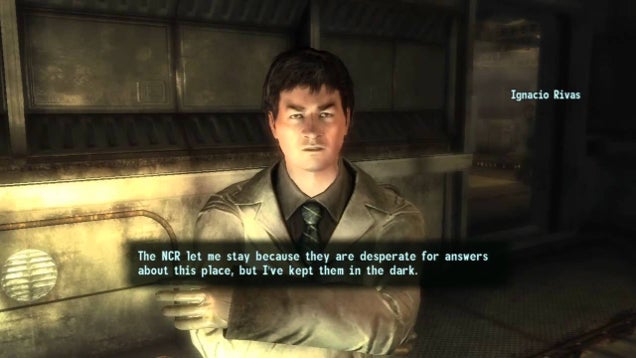 And there's the lockpicking, which is pretty much ripped straight from the hallowed doors, safes, and ramshackle woodsheds of Bethesda's massive wasteland-rover. 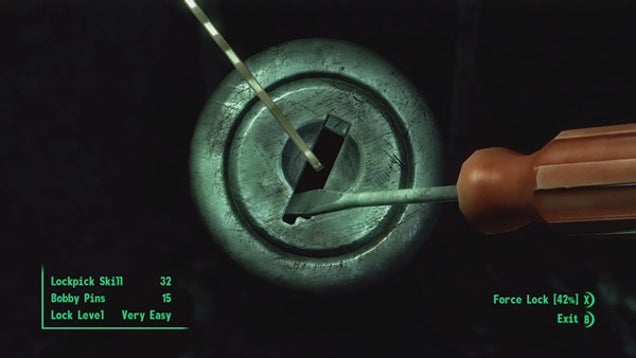 But where Dying Light truly zeroes in on Fallout's formula for infinitely compulsive success is exploration. Plenty of open-world-ish games offer vast countrysides (or cityscapes or jungles or moons) to wander around in, but few make the simple act of exploring its own reward. Both Fallout 3 and Dying Light do that in spades.

During my hundreds and hundreds of hours with Fallout 3, I mostly tended to play like some kind of post-apocalyptic private eye. Each new location, whether it was a decaying skyscraper, Super Mutant-infested cave, or psychotic-gas-spewing vault, was like a crime scene. I felt this clawing need to investigate, to find out what exactly happened; who the all-too-literal skeletons in the closet belonged to, why a coffee cup was in a filing cabinet or, most frequently, how everybody died.

Other action games throw you headlong into The Moment—the big shootout, the Hollywood chase with cars driven by explosions, the thumb-wrestling match that will decide the fate of the world—but Fallout 3 was set long after the fact. The credits on all the typical video-game-y setpieces had already rolled. As a result, much of its world was empty, but occupied by faint echoes of life. Its was the aftermath of a tragedy, and I was obsessed with putting together all the puzzles pieces, imagining how everything played out in my head. I read its environments like a book or a series of short stories.

Each time I played, whether it was for 15 minutes or 15 straight hours (which is, yes, something I actually did on a couple occasions), I came away with a burbling brain cauldron of micro-stories. I felt like a child in Fallout 3, both in that a) I was constantly awed by endless volumes of new information and b) I wouldn't stop chewing on the scenery.

Now, it's easy to argue that Dying Light is set during a potential apocalypse, not after one. That in itself makes for a pretty different story/world vibe, but the appeal ends up being similarly spine and brain-tingling. As with Fallout 3, everything in Dying Light is just an excuse to explore, and that's mostly great. Main quest, side quest, or challenge — it doesn't matter much: the point is that you'll run, leap, and see new, interesting sights. Oh, there might also be a zombie or two or five hundred. Just remember that the floor is lava and you'll be fine.

Environments are painstakingly detailed. Many are slick with gore and sick with rot, but it's not too much of a stretch to imagine someone recently living in them. Here are just a few I've stumbled across in my rooftop-hopping travels:

I suppose it's really not a stretch to imagine someone recently living in that last one. Yikes.

So naturally, I arrive at these places and begin to wonder what their old occupants were like. What were they working on? Who was their family? What take-away food did they order before it disintegrated into diseased-ridden mush? What were these movies and sporting events they all seem to enjoy so much like? Why are they all obsessed with teddy bears?

Admittedly, Dying Light's environmental cues don't lead to fully fleshed out stories or quest lines as often as Fallout's, but in some ways I like that more. It lets my imagination do the majority of the heavy lifting. There's something powerful about that. I get to own my experience of a world that, even without my embellishments, feels real.

That said, Dying Light does get a little lazy in places. I've come across multiple locations where interiors were almost mirror replicas of each other, and those moments definitely broke the illusion for me. The world doesn't feel quite as lovingly crafted as Fallout's, which is kind of a bummer.

Dying Light also commits the cardinal exploratory sin of being too video-game-y for its own good. For instance, in Fallout 3, most encounters with actual flesh-and-blood people are memorable. Not only does Fallout 3's world feel like it was lived in before everything went to hell, but the people still living in it are uniquely twisted individuals. Again, talking to them, getting to know them, is often its own sort of reward (in addition to whatever item(s) you might get for completing their quests).

Dying Light tends to skip that part. Quest-givers at the game's central hubs are generally boring to talk to, and people you encounter while you're frolicking through the zombie fields are often carbon copies of each other. Somebody needs rescuing, you rescue them, and they're like, "Thanks bruh, here's some cash. I'm gonna disappear forever now." They are reward dispensers, not people. (Except on rare occasions, like with this guy I found on a roof.)

Same with many environments. Yeah, it's cool to find both a neat scrap of story and a cool new weapon in the one place, but it's possible for a game to go overboard. No moment sums up that issue better for me so far than when I found that guy who hanged himself. When I first saw him just dangling there, tropical sun painting his motionless body in an almost idyllic light, it chilled me to the bone.

Sure, I'd spent the past six hours thwacking reanimated dead bodies over the head with comically large pipe wrenches, but this was something else. This man took his own life in a moment of... desperation? Fear? Acceptance? Desire to end life on his own terms, not as some endlessly ravenous virus husk? It's not like this sort of thing is unexplored territory for zombie, well, anything, but I was still stricken by the fact that I found something so nauseating while idly wandering and goofing off.

Then I saw a glimmering golden trophy sitting near him, practically screaming, "TAKE ME, TAKE ME. EVENTUALLY YOU WILL GET AN ACHIEVEMENT," and that was it: moment ruined. Here I am, staring at the gasping end to the totality of a person's existence and then... points! Dying Light gamifies that fuck out of everything too ("you just jumped kinda high, HAVE MORE POINTS"), so it's hard to lose yourself in its world. In that way, Dying Light sometimes feels at odds with itself—with its strongest aspects, no less-and that's a real letdown. 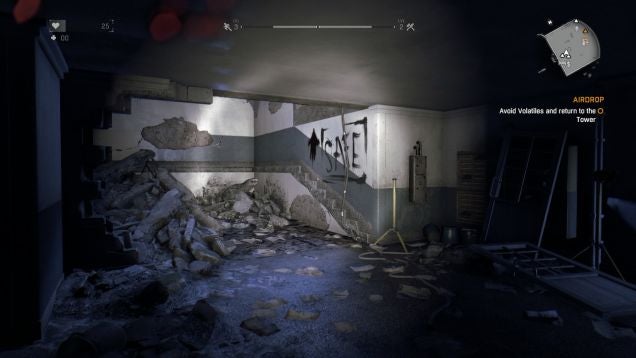 Granted, one could argue that Fallout 3 did similar things with experience points and Pip Boy bobbleheads, so I suppose the real issue here is that designers aren't confident enough that exploring in and of itself is fun. That we don't need someone handing out candy next to the light at the end of the tunnel.

Still, I couldn't stop playing Fallout 3 years ago, and I can't stop playing Dying Light now. It's a lot of what I loved about Fallout 3 combined with arguably more compelling central activities (running and jumping, both of which feel weighty and intoxicatingly satisfying) and combat that has actual heft to it. It is, in a very real sense, scratching the Fallout itch for me while I wait seven million eternities for Fallout 4. On that note, has it been seven million eternities yet?