Crisis Management: Why DC Comics is Always Changing Everything

Four years ago, DC Comics killed all of their long-running titles, replacing everything—including their oldest Superman, Batman and Wonder Woman series—with new #1s. This past Friday, they've announced that they're practically doing that again. Big, universe-shuffling change is a constant at DC Comics but it's happening more frequently than ever. Let's look back at the cycles and try and figure out why.

DC's icons, Superman, Batman and Wonder Woman, are some of the most recognizable fictional characters in the world, whether you read comics or not. There've been many versions of Clark Kent, Bruce Wayne and Diana of Themyscira and the many heroes and villains of their world over the decades, with revamps, reboots and re-toolings coming faster and faster in recent times. Superhero comics are built on the premise of escalating novelty, of some new development being there to surprise you in the next chapter.

The characters that form the foundation of DC Comics' superhero universe have been around for more than 70 years. That's a long time to try and keep secret identities and thrilling adventures fresh, especially with media ecosystems and changing audiences over all that time. Superman used to change into his costume in a phone booth. Those hardly exist anymore.

Back when a Superman comic could sell millions of copies at 10 cents an issue, the sweet spot in terms of reader age was probably somewhere in primary school. In the 1960s, after rival Marvel Comics started presenting a different, more grounded take on what a superhero could be, university students made up a growing chunk of the readership.

Nowadays, people who read DC's superhero comics on a regular basis are likely to be in their thirties, on average. The real-world context in which these stories are made and sold is constantly changing. Continuity reboots are a way to try and slough off concepts that are deemed unworkable, introduce new heroes and update longstanding characters. They build buzz and tease with the promise of the unexpected.

A Crisis Of Infinite Crises

In 1985, DC Comics, struggling for relevance against a surging Marvel Comics, threw the hugest curveball in their publishing history. It was a year-long maxiseries called Crisis on Infinite Earths and the most prominent of what'd become DC's obsessions with publishing major series that weren't just supposed to function as stories but as a sort of editorial clean-up As the series went on, beloved characters like The Flash—one of them anyway (we'll get to that)—were killed off and others were introduced, in ways that would reverberate through DC's creative efforts for decades.

The pre-Crisis DCU had two Supermen, two Superboys, two Flashes and dozens of alternate realities, so the central purpose of the series was to streamline a complex, unwieldy fictional history into something more easily understood. As a result, the major characters would be re-invented in terms of tone and visual design, too. After Crisis, Superman and Batman wouldn't be dear old chums anymore. The Man of Steel and the Dark Knight had a grudging respect for each other, with Batman vowing to take Superman down with a shard of Kryptonite if he ever stepped out of line. This kind of dramatic tension was DC's high-risk gambit to gain ground they'd lost to Marvel. Marvel's selling point had long been that their characters existed only one world—Spider-Man being a perpetually broke twentysomething in New York City, for example—which was closer to where readers lived.

Prior to Crisis, re-inventions of characters and mythos in the DC Universe were primarily confined to individual titles or families of titles. In the 1950s, DC started re-imagining their old superhero concepts as new characters. There was a new Flash, a new Hawkman and a new Green Lantern, radically different characters who bore no textual tethers to the old ones. At least at first. Soon, though, the heroes were meeting each other. The tradition started way back with The Flash of Two Worlds, a seminal 1956 single-issue comic that posited that original Flash Jay Garrick and new-guy Barry Allen operated in different dimensions. An in-story explanation that connected the predecessor heroes with their thematic successors didn't follow for another few years.

Meanwhile, mainstay characters like Superman, Batman and Wonder Woman had been kept chugging along and didn't go through the same kind of wholesale facelifts. Superman was always Clark Kent. When the multiple-earths concept blossomed, the persistence of the DC Universe's holy trinity was explained by having them exist in almost every alternate reality.

DC's idea in 1985 was that having only one Earth would create easier readability and heightened stakes. And that would help them sell more comics, they figured.

After Crisis on Infinite Earths ended in 1986, even the crossover events that didn't have the editorial goal of reconfiguring DC's multiversal continuity still bore the influence of the maxiseries. Legends, for example, placed dormant characters like Captain Marvel into the core of the DC Universe and passed the mantle of the Flash to former Kid Flash Wally West. More importantly, it seemed that there was more room for experimentation at DC. In terms of perceived coolness (and often sales), they were solidly in second place behind Marvel. So. offbeat books were greenlit, like The Question, a Zen Buddhist character exploration that reinvented a Steve Ditko character acquired by DC and Suicide Squad, a villain-centric soap opera steeped in late-era Cold War paranoia. Creatively, at least, a multiplicity of superhero approaches were cropping up at DC.

But things were still messy in terms of continuity. The post-Crisis stories were all supposed to fit with each other. They didn't. In 1994, a mini-series called Zero Hour wound up being probably the most controversial of DC's periodic reboots. Set in motion months before with a shocking Green Lantern storyline, the miniseries was meant to clean up some paradoxes that popped up after Crisis on Infinite Earths but wound up angering many readers with a hero-turned-villain plotline that turned long-time Green Lantern Hal Jordan into cosmic villain Parallax. Some beloved Golden Age superheroes who debuted in the 1930s and 1940s were killed off or pushed to the fringes, as editorial execs said that they were relics of an older age who wouldn't be appealing to modern readers.

For a certain cohort of fans, the twists and turns taken to try and include everything from DC Comics' messy history into one fictional construct were part of its charm. Why were characters active during WWII still spry 50 years later? The explanation was literally comic-book magic. And with that magic was taken away, it felt like DC was admitting it didn't know what to do with the characters that had been part of their bedrock. It also seemed that they didn't know how to reconcile the readers it had and the ones they'd hoped to gain.

And then, 20 years after Crisis on Infinite Earths, Infinite Crisis debuted in 2005 as a sequel to the multiverse-condensing maxiseries. COIE's finale had retired DC's oldest versions of Superman and Lois Lane and a "real-world" Superboy Prime to an idyllic pocket reality. But Superboy Prime got increasingly upset at being locked away, punching the dimensional barrier that kept him there. Those punches re-wrote several events in the fictional timeline and eventually set the sequestered heroes free. The drama that followed restored a multiple-Earths architecture to the DC universe. There was room again for the less cynical, more brightly coloured characters of the past to exist alongside more post-modern versions of Batman and Superman.

Of course, this would change too.

The Final Do-Over, Until The Next One

Just five years later, the Flashpoint crossover event wiped the slate clean yet again, resulting in a whole new crop of #1s. More than any of its predecessors, Flashpoint and the New 52 restructuring that followed betrayed the tensions inside of DC Editorial.

Rumours pointed to philosophical differences amongst the triumvirate in charge of DC's editorial as to whether another reboot was necessary. You can see this in the fractured approach to continuity across the line: Green Lantern books plowed ahead as if nothing happened, while Superman titles started afresh with a new origin. Events in the Batman family timeline were changed but in ways that wouldn't be revealed for months and years, and even then the new treatments of, say, who exactly was Robin at what time didn't make sense.

At first, The New 52 offered a few titles that harkened back to the thematic breadth of DC's publishing history—western and vampire books, for example, that happened in the same space as Wonder Woman—but those didn't last. The publisher doubled down on superheroes again and again, trying to gin up interest by recycling old characters into New 52 versions.

Now, Marvel Comics has had its share of large-scale editorial stunts, too. This summer's Secret Wars promises to be the biggest of them all. But the House of Ideas hasn't gone to the reset button nearly as much as its superhero rival. It's hard not to read DC's dependence on the various changes and reboots—which come with increasing frequency— as a foundering lack of direction by its editors and a loss of confidence in its creators . Somewhere, close to the top of its pecking order, decision-makers are steering by editorial fiat, insisting that they know what would read or sell better than the actual people creating the monthly adventures of the company's characters.

The latest changes, announced Friday, aren't a full reboot. A handful of super-hero books that launched with the New 52 will remain, along with some recently-launched books mostly featuring the predictably popular DC mainstays such as the Teen Titans. About two dozen new books will launch in June, and, while they are mostly super-hero-centric, it sounds like they'll be liberated from the expectations of tight continuity that seemed to be the recipe for the inevitable cullings and Crises to come. 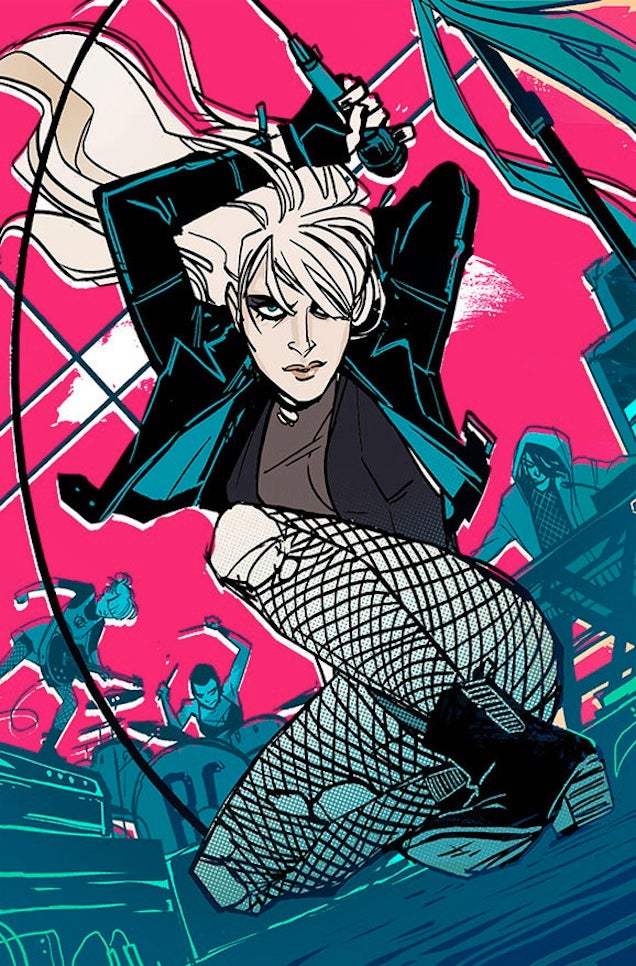 What's most weird about the upcoming revitalisation after this year's Convergence event is that it looks like it WON'T be renovating DC's multiverse yet again. Rather, the tonal shifts being hinted at will be shedding previous iterations like old skins, like Batgirl did last year. The grim, tortured family conflict that Barbara Gordon fought through when her New 52 book launched hasn't been voided; it's simply no longer discussed, replaced with more light-hearted adventures that are fodder for Gotham City's hungry social-media hounds.

Much of the talent rosters working on the next wave of titles come from backgrounds that could pump in desperately needed energy into DC's multiverse. If that winds up happening, it'll make the best possible consequence of a reboot come true. Hopefully, any re-shuffling will be a long ways off.