It was only a matter of time before Minecraft put out an official licensed (and therefore not free) something related to The Simpsons thanks to its new corporate overlords at Microsoft. What's genuinely surprising about the Simpsons "skin pack" announced today is just how...unsettling it looks.

The Simpsons "content packs," which will cost $1.99 (UK price not yet confirmed), are coming out for the Xbox 360 and Xbox One versions of Minecraft in late February, according to an Xbox Wire post that begins with this promise: "Minecraft fans can soon bring the characters of Springfield to life in fully-textured, cubic glory." The irony of that statement, of course, is that it's about Minecraft—a video game that allows its legions of fans to build blocky versions of pretty much anything they want.

Players have already been making chunky tributes to The Simpsons for a while, then. Just take this version of Homer, for one: 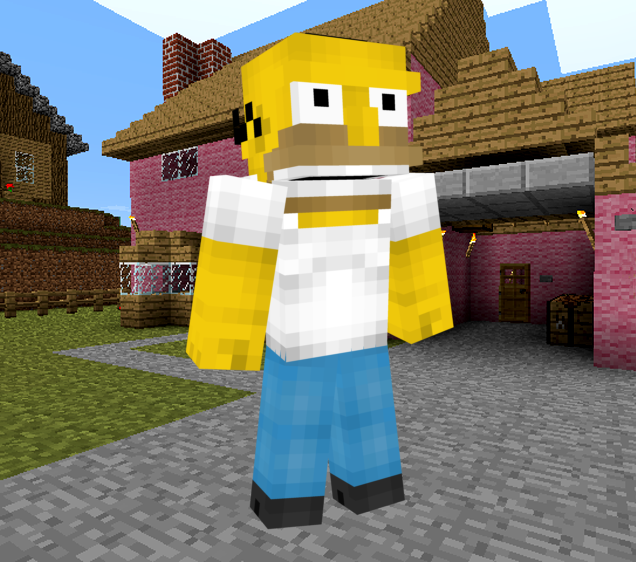 Or this Simpsons survival game, posted on YouTube back in August 2012 by Enderwarp:

Or any number of other fan-made creations you can find by simply typing "The Simpsons Minecraft skins" into Google. YouTuber rockbandprincess1 had enough of Simpson family patriarch Homer to do a roundup in June 2013:

Hell, even The Simpsons show itself picked up on the trend in April of last year, when it made one of its famous couch gags in the Minecraft style:

(Side note: I would totally play a version of Minecraft that looks like this. Amazing.)

What's unsettling about the official Minecraft Simpsons is that they somehow look more...I dunno what to call it. Unsettling? Deformed? Just off, somehow? In comparison to others I've seen.

There's just something about the level of granular detail that sets me off. I can't call it an uncanny valley problem, since these are yellow cartoon people. But the level of accuracy hits a too close to home, if you ask me. I mean: just look at Homer's chin! This is The Simpsons we're talking about. You really don't need to do much more than make a yellow cube with two black lines on top for a head, and people will know what you're getting at. And don't even get me started on Bart and Maggie. *shudders*

Granted, Xbox Wire didn't show the Simpsons in action. So here's hoping that all will be well for console gamers come February.