Every now and then, some excerpt or scene from a manga or movie or TV series will make the rounds on the internet that will pique my interest. In most cases, that one scene or excerpt will be the most notable thing, with everything else paling in comparison. Literacy of Nana was one of the rare exceptions.

Manga artist Miso Suzuki is a pragmatic realist who tends to write real-world manga focused on his own experiences and world views, often featuring himself as the protagonist. He used to write a regular diary-esque manga for Weekly Famitsu in which he would make insightful observations on the behind-the-scenes workings of video games and the video game industry. In his manga, Literacy of Nana, he offered one of the best monologues on the free-to-play model of gaming I've ever read.

Literacy of Nana follows the protagonist, Nanami Konomi, a student who comes to work as a paid intern at the consulting company, Protect. The president of the company is a man named Jingoro Yamada, an eccentric genius with an uncanny ability to see through problems and offer logical – though often obscure – solutions.

Working with Yamada, Nanami – aka Nana – begins to realise her ignorance of the world around her and come up with ways to use technology to find solutions that weren't clear before.

Much in the manner of many of his previous works, author Miso Suzuki injects much of his own views and opinions into his manga. In the two volumes that are currently available, Nana is forced to tackle two major assignments, both of which Suzuki has either strong feelings about and/or personal experience with. The first involves a manga artist who is trying to transition between print publishing and digital distribution. This arc of the story is mainly a semi-autobiographical account of Suzuki's own experience switching to a digital model and becoming his own editor and publisher after a long career of leaving the publishing and distribution to other people.

The story talks about many of the issues of self-publishing that most people don't think about, like projecting sales, obtaining rights to your own previous works back from a publisher, and how to market on a digital platform. The story is educational and carries a great deal of weight because it comes from personal experience.

The second assignment involves an old-school game developer disheartened by the fact that his company has turned to the free-to-play model of gaming and is mass-producing mediocre simplistic games to nickel and dime people with payable content. The arc culminates with an impassioned speech from the developer where he speaks of how games should be. (The speech has been translated at the bottom of this article for those who are interested.)

The solutions to the problems faced are relatively straight-forward but it's the process and explanatory dialogue that make Literacy of Nana interesting. The characters themselves, consequently, are rather secondary. Nana is your typical cool emotionless girl and Yamada is the archetypal "smartest man in the room" and neither deviates very much. The real character growth lies in the people who have their problems solved, but such growth is overshadowed by the much more interesting plot itself.

Taking a step back, Literacy of Nana isn't really an in-depth narrative about someone or something. It's more of an observation and commentary on technology, business models, and how things are, which is what Suzuki has always excelled at. But by adding the problem-solving element to the story, the reader is taken along for the ride and drawn in. The manga is very wordy with few emotional ups and downs and the art style is somewhat particular, but overall it is a compelling read that offers a great deal of food for thought as a reward. 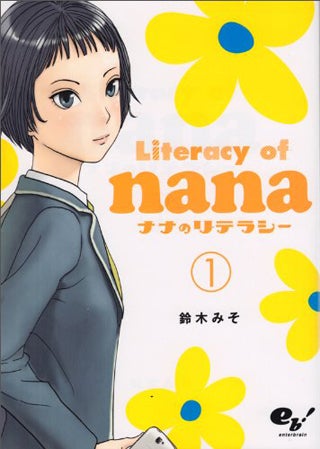 Note: The first chapter can be read online for free here. (Japanese only)

"There are some things that you should and should not sell. Games are about making effort enjoyable. When you accomplish difficult tasks using your mind and body, your brain rewards you by releasing chemicals. The exhilaration after exercising, the proud feeling after being complimented, being moved to tears... These are things we don't encounter often in reality. By offering a finely tuned difficulty that anyone can clear... 'Astounding!' 'You can do it!' 'Well done!' ... games offer an amazing sense of accomplishment. An experience that children who aren't complimented often in the real world go to of their own accord, that is the heart of games.

By using real money, you skip that important game experience. Reward obtained through money, without any real effort, is a drug. People who become addicted to the random draw elements, who pour money into them can't control themselves. Bypassing the effort in games, buying time in games, buying other people's experience with money is no different from peddling drugs. Games are a world of artificial experience so the line is hard to see, but it's important to keep things from spilling over."