It's early January in the Year of our Lord 2015. Is there a better time to release a mobile game based on the beloved 1987 Rob Reiner film The Princess Bride? I can't think of one.

The game, which is simply called The Princess Bride, costs £2.99. Not too bad, though its app store page advertises that it offers in-app purchases, which is never a good sign. I downloaded it, fired it up and was greeted with an art style that I can only describe as "Modern Free-To-Play Game." This is not a free-to-play game—it cost £2.99—but it looks like one. 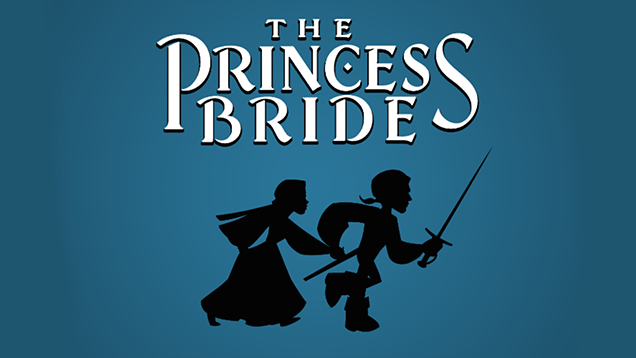 The menu music is this nice acoustic guitar solo thing that sounds vaguely like the main love theme from The Princess Bride but isn't it, which is a bit jarring, considering how the rest of the game uses a lot of actual sound effects from the movie. Whatever.

The Princess Bride contains four mini-games, which range from "lousy" to "passable." You start with one game unlocked and have to earn stars by playing them to unlock the other ones. If you would like, you can just pay an additional $0.99 (£0.66) to unlock the other three games straight away, which means the game really costs closer to £4.

As a reward for playing the games, you will unlock little audio clips from the movies. "I'm not a witch, I'm your wife!" You can also just pay $0.99 to unlock all of the audio clips straight away. I don't know why you would want to do this. 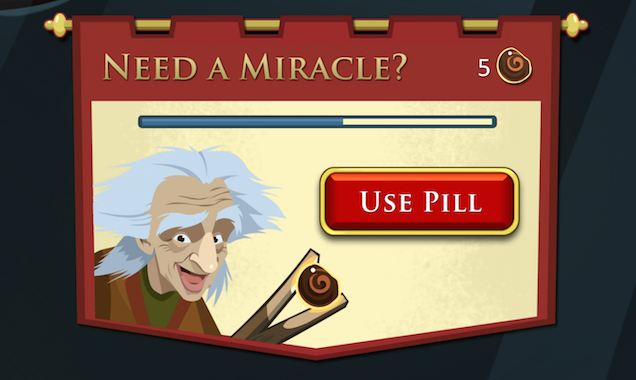 Each time you fail at one of the games, Miracle Max pops up and offers you a magic pill, which lets you keep on playing without having to restart. You start out with five pills, but after you use them, you'll have to pay for more. You probably don't need them, though.

I played all four of the mini-games and will now report on whether or not they capture the magic of The Princess Bride. (They do not.) Here we go. 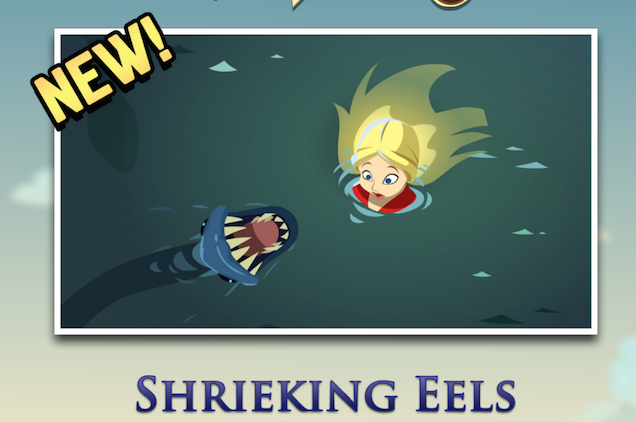 How it works: Eels charge at Buttercup and you kill them by tapping their heads. I guess you're playing as Fezzik.

Best Part: Reliving an exciting two-second excerpt from a movie over and over again.

Worst Part: After you make it through a few waves, there's a "boss eel" that you have to tap a whole bunch of times in order to kill him. At least, I think that's what you have to do, because I didn't tap him enough times.

Is it like the movie?: Not really, mostly because it's almost impossible to beat, so it always ends with Buttercup being devoured by eels.

How I Stack Up: I am currently in second place behind Westley. Apparently he's good at clobbering shrieking eels, even though he wasn't even there. Third place goes to writer Andrew Hayward, who is apparently the only Game Center friend I have who has also played this game. 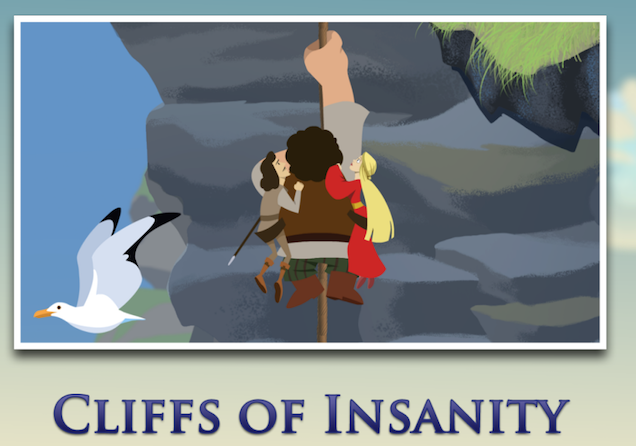 How it works: You control Westley as he climbs the Cliffs of Insanity behind Vizzini's crew. Tilt your phone to swing the rope to the right and left, dodging outcroppings and seagulls while attempting to collect coins. Because... coins.

Best Part: This one actually feels pretty good to play, tipping your phone around and dodging seagulls and whatever.

Worst Part: It gets ridiculously difficult early on and eventually becomes more or less impossible. Westley dies if you mess up once, grunting with this sad little sound effect lifted from Cary Elwes in the movie. It sounds more like a guy pulling out a splinter than a guy falling to his death.

Is it like the movie?: Not really. I don't remember there being this many deadly seagulls in the film or the book, let alone falling "comets" that are really just regular boulders that make an "eeeee" sound when they appear.

How I Stack Up: Somehow I'm in first place, ahead of both Fezzik and Humperdink, despite the fact that I never caught up to Fezzik.

Interlude: Time to Pay Up

After I played the first two games, I decided to spend an extra $0.99 to unlock the other two games, because I was clearly not patient enough to earn the stars needed to unlock them the old-fashioned way. If you ask me, charging an extra dollar for the rest of a game I already paid £2.99 for is horseshit. 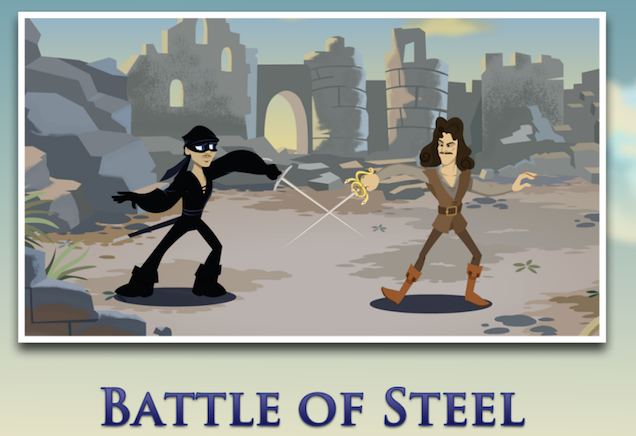 How it works: When I saw the image for this game on the menu screen, I thought, "Oh shit yeah, Battle of Steel! Time to cross swords!" Unfortunately, you never actually swordfight in this mini-game. It's basically just Fruit Ninja but with swords instead of fruit. Sword Ninja. Hey, I'd play a game called Sword Ninja.

Best Part: Sometimes you'll have to swipe at a gold-encrusted sword that looks like Inigo's sword, and it'll take more swipes to destroy it.

Worst Part: I thought I was going to get to actually fight with Inigo here, but… no.

Is it like the movie?: Well… it's a little bit like that one part where Westley throws his sword into the conveniently placed shrubbery, does a flip off of the gymnastics bar, and sticks the landing. ("Who ARE you?") But, no, it's not much like the movie. I didn't get far enough to find out if there's a part where you have to switch it up and start swiping with your other hand. If that happens, it would be so amazing it would probably redeem this entire game.

How I stack up: Second place, ahead of Vizzini but behind Miracle Max, a.k.a. the two Princess Bride characters least likely to actually be good at juggling swords. 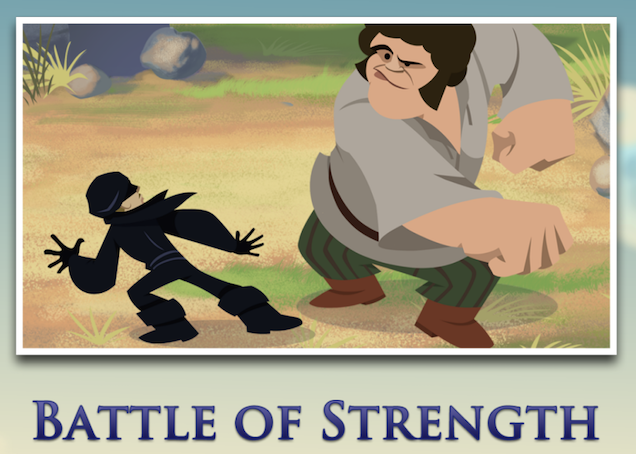 Instructions: No written instructions. At one point the screen says, "tap tap tap!"

How it works: You have to swipe left and right to dodge Fezzik's punches, then swipe up through his legs and quickly tap the screen to choke him. If he hits you, you die.

Best Part: It feels a little bit like Punch-Out!

Is it like the movie?: Sure. I mean, it's probably accurate that if Westley missed a single dodge against Fezzik's punches, he would've been dead meat.

How I Stack Up: I'm in a woeful third place here, behind both Inigo and Princess Buttercup, who is apparently the reigning champ of giant-choking around these parts.

Games of the Future 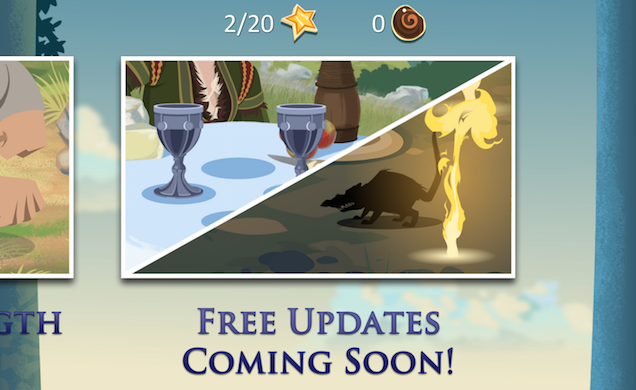 It looks like The Princess Bride will add some new mini-games (which will doubtless cost a bit more money), including what looks like the poison-drinking game against Vizzini and a fight with an ROUS in the Fireswamp.

Games They Should Add But Won't 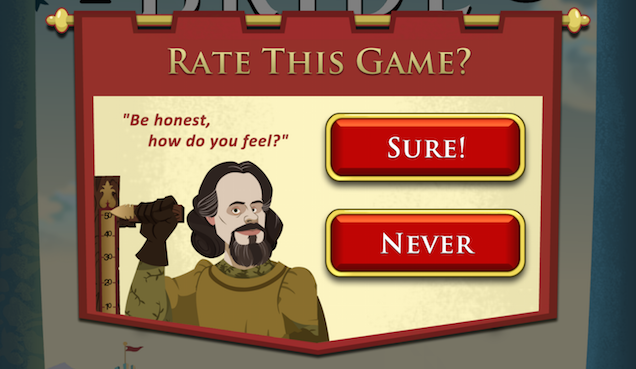 Okay, Christopher Guest, I'll be honest. How do I feel? Like I wasted five bucks, and like I want to rewatch The Princess Bride. Not as bad as it could've been, I guess.