Leave the Hinterlands. I've heard it time and time again following the release of Dragon Age Inquisition: don't stick around in the starting area. We gave you this advice. Bioware encouraged the same thing. Our readers seem to agree: leave the Hinterlands.

As you might know, The Hinterlands—the first large area accessible to you in Dragon Age: Inquisition—is full of stuff to do. Lots of missions, lots of collectables, rifts to close, dungeons to forge through, and loot to pick up. Some players have reportedly spent dozens of hours in the Hinterlands doing all these side quests, never actually advancing Dragon Age's story or really getting to know the cast of the Inquisition—both of which are probably the real reasons anyone would pick up a Bioware game in the first place. Players everywhere are telling each other to stop spending so much time in the Hinterlands, so they can see what else the game has to offer. The claim is that Dragon Age has way better stuff inside of it.

It's largely true—to a degree. But I've found that, in the 50+ hours I've spent in Dragon Age, nearly every area is like the Hinterlands. Every area has lots of meaningless quests that don't really capture what Dragon Age or Bioware games are about. Let's break the down the type of missions, so you can see what I mean.

There are capital Q quests, which move the story forward—maybe you have to find out what happened to the Wardens, or you have to get the Templars on your side. These types of missions, I have no problem with. There are also missions that are region-specific—like one where you deal with a dragon that has been terrorising an area, or one where you solve an area's dungeon. These aren't as compelling as the Big Quests, but they can still be enjoyable. Then you have completely silly missions, like "this random NPC wants you to put a flower on his deceased wife's grave" and "herd all the Druffalo!" And underneath that is the filler, which revolves around item collection, and killing certain types of baddies (sometimes in specific numbers.)

Many Bioware games provide diversions that are less "meaty" than the main game—you can scan planets in Mass Effect, for example, as a means of collecting resources. But Dragon Age has fallen prey to a plague normally reserved for open world games: an overabundance of fluff. Collect X amount of Y item. Kill X number of enemies. Find X number of Y. Sometimes these types of missions a narrative twist, but you're still left with an unfulfilling checklist that counts down how many of X you collected, or how many of Z you killed. 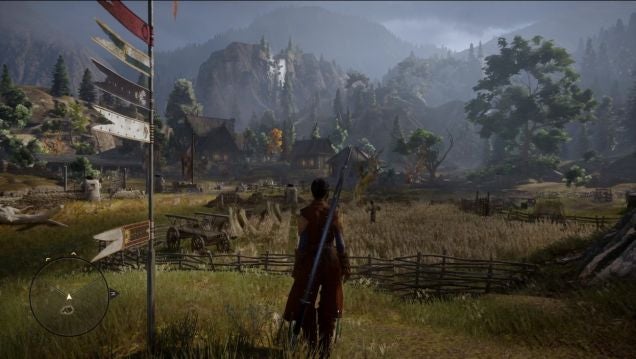 Last night a character in Inquisition tasked me with finding five of a certain type of herb. The character told me her clan was having a tough time trying to survive and needed this herb to make the situation better. I thought to myself, OK, this isn't the most interesting side quest, but if I see this herb along the way, I'll collect it. Why not? I then took approximately ten steps away from this character, and noticed five of said herb growing right there, in front of the person that gave me the quest. I was incredulous. And no, I was not in the Hinterlands.

It doesn't matter if you're in the Hinterlands. Dragon Age is full of stuff that isn't very interesting to do. We get to travel all around lush, huge locations with the sort of variety that would make Dragon Age 2 weep, but to some degree all the game is doing is changing the scenery. The bulk of what these areas have you do is very similar. You know that, when you get somewhere, you'll always have the same core types of missions waiting for you in Inquisition. Close the rifts, collect the shards, and so on.

I don't want to make it sound as if the new Dragon Age is devoid of meaningful things to do. In addition to Stuff™, there are also many fantastic quests, major and sidequest alike, which give you insight into the rich, complex world of Thedas. Heck, that same area with the herb quest also hosts two important personal missions that the Inquisitor's companions sent me on. Those are sidequests, too. They're not all bad! If I sound annoyed, it's because it worries me that Inquisition's creators felt the need to populate such a big world with so much extraneous stuff that nobody is going to remember fondly if they spend dozens of hours playing through it.

Smart, little things are what I'll cherish about this game. I might think about a conversation with a party member for days—last night I was freaking out about meeting a son I fathered at the end of Origins. The conversation lasted maybe 15 seconds, and it's going to stay with me forever. I'm also amused by clever missions such as the one where Dragon Age asks you to go to a masquerade ball to dance, charm the court of Orlais and uncover the secret plot surrounding empress Celene. It's stuff like that that keeps me playing Dragon Age—not the fact that, thanks to places like the Hinterlands, the back of the Dragon Age box might as well boast about how it has OVER 100 HOURS OF GAMEPLAY!

Despite my misgivings about the game's filler, I've found some value in it. Many of the mundane missions that make up the bulk of Inquisition provide good buffers between intense missions packed with heavy subjects and difficult decisions. I can chew on stuff while I dungeon-crawl in a temple I found hidden in the Storm Coast. The dungeon—which is optional—doesn't have to provide me with any new insight about the chantry, or the tensions between Ferelden and Orlais. It just has to give me something to do.

I can't deny it: I'm playing through many of the sidequests inside of Inquisition. But that's because it's hard to fight the compulsion to be a completionist, not because I always think the mission design is good. On the contrary: much of the filler flattens the world of Thedas—the juicy conflict between mages and templars will get reduced to a mission where I have to kill a certain number of either factions, likely both, while roaming around whatever map I find myself on. Filler is disappointing in Dragon Age because it detracts from the richness that normally defines Dragon Age.

You can try to leave the Hinterlands. You can visit the swamps of Fallow Mire, the sands of the Forbidden Oasis, the waters of the Storm Coast. But depending on how you play, it might not make any difference.