Is there anything more paralysing than a blank slate?

I've had Fallout 2 open for three hours. I have played it for zero. I'm bleary eyed. Exhaustion is clinging to my eyelids like some mad brigand swinging from a chandelier. How did things end up like this, I wonder. Why can't I just make a few simple decisions and, you know, play a video game?

It's just... there are all these numbers. And skills. And traits. What if I make the wrong choice and, hours later, have to start over to play the way I want? This always seems to happen to me when I start a new RPG (or a classic I haven't played before), and most recently I've been stuck at the starting line in both Fallout 2 and Wasteland 2. Thus, I've decided to lay out every step of this vicious cycle in hopes that others can break it before they fall into the pit of weary indecision I only just climbed out of.

This one sets in before I even start playing an RPG. It's the reason I've put off playing some legitimately great games for ages. I look at the game icon on Steam. It's a tiny world of possibility, a portal to a vast land my eager eyes and hungry hands have never touched.

And decisions that will STICK WITH ME FOR THE REST OF MY LIFE.

My virtual life. But still, that means I've got some serious thinking to do. I need to go to my Consideration Corner, put on my Consideration Cap, and beat the stuffing out of my brain with my Consideration Bat. And that's kinda stressful! Just the idea of it. Creating a new character from scratch is fun, sure, but it's also work.

And in many RPGs, it's not just work-work, it's guesswork. You pick a bunch of skills and stats without fully knowing what you're getting into. Even with all the preparation in the world, you could still end up getting a raw deal. 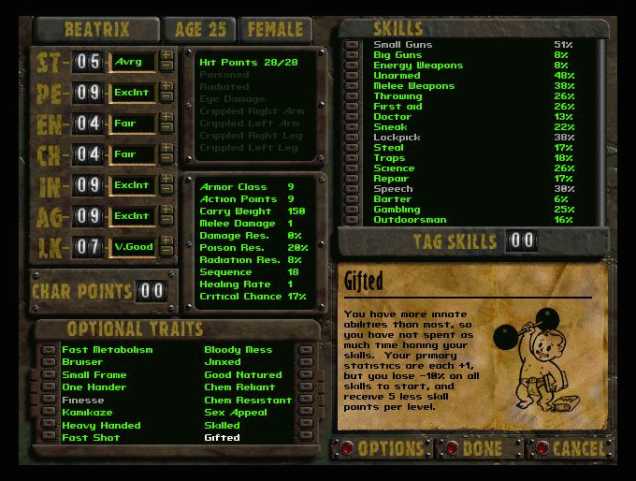 "Best [Insert Game Name Here] character builds," I type into Google. That should give me some quick guidance, right? I don't want to copy them necessarily, but I want an idea of what stats and skills work best for various play styles—not to mention which ones might be entirely useless despite how cool they seem. In more complex RPGs I consider this a necessary step (except when I'm reviewing them, for obvious reasons). Case in point: I never would've known that luck is basically worthless in Wasteland 2, or that intelligence is—in some ways—more important than charisma for conversations in Fallout 2.

Good, good. Basic advice. I'm feeling better now. Thanks, guides and walkthroughs. Now I guess it's nearly time to get start— wait, one-hand specialization makes better snipers than sniping in the long run, you say, Fallout 2 forum person? But someone else disagrees entirely? Oh jeez, this just got complicated.

It has been hours. Actual human hours. This forum thread goes on for 83 pages, and god damn it I will read all of them. I NEED TO KNOW if one-hander is a more optimal pick for my build than small frame. I mean, one of my traits obviously has to be gifted. Obviously. But I need every last drop of anecdotal evidence to help me decide on the other. I must drink it all in, hold it in the deepest bowels of my knowledge, and keep it there even though the information overload burns like I've eaten ashes.

This one guy, he argues that one-hander gives a bonus to most of the more useful weapons in the game, and with some careful stat balancing you can get better range and accuracy than any sniper. And he's got math to back it up. But this other guy, he says it's all poppycock, horsefeathers, and other fantastic dismissal words that never should've gone out of common usage, and he's got maths too! If I go with small frame, he says, I won't be able to carry quite as much, but I'll be orders of magnitude better in combat. Magnitude! And I'll be able to try out so many more weapons, whereas one-hander is kinda limiting.

It all seems to suggest that this stuff matters so much. It matters MORE THAN ANYTHING ELSE IN MY LIFE RIGHT NOW. I will not leave until I've seen the end of this argument two dudes had four years ago. I need resolution. I need something definitive. I crave it, from the top of my messy tangle of hair to my rot-stench armpits to my overgrown toenails. I beg, all alone in my dark room, a series of quiet rasps: "Please, please, please. Someone make up my mind for me."

OK yeah, that forum argument was pretty much worthless. I pick small frame because I'm bored and tired and I never want to hear about percent margins on crit chances ever again. Did I make the right choice? Who knows. All my other stats are allocated pretty well, so even if I didn't it's not the end of the world, right?

Oh god, I still haven't done anything with my character(s)' appearance yet. No biggie, though, it's not like I get really obsessed over this stuff too hahaha.

I'm a few hours into the game now and things are going fine—better than fine, actually—but what if I was wrong before and maybe I should just roll another character or six to make sure yeah yep that sounds like a good and reasonable thing to do ok I will do that.

In all seriousness, there are some things I think game makers can take away from all this, stuff I'd like to see in more RPGs to make this process a little less of a hassle. Don't get me wrong: I'm all for real consequence in games—not just the illusion of consequence—but I think there are better ways to create it than by tossing players into a deep end of nebulous decisions and telling them to swim.

Foremost, I think RPGs should at least include a mode—if not a default option—to re-spec stats and skills conveniently. The nature of an RPG, whether old-school or modern, is that your character evolves over time, so it's impossible to really understand what you're working with until you've invested a fair amount of time in a character. If people want to play without an option to re-spec early and often, cool. But for people who'd rather try out a bunch of stuff—mix and match—I don't see why they shouldn't be able to. 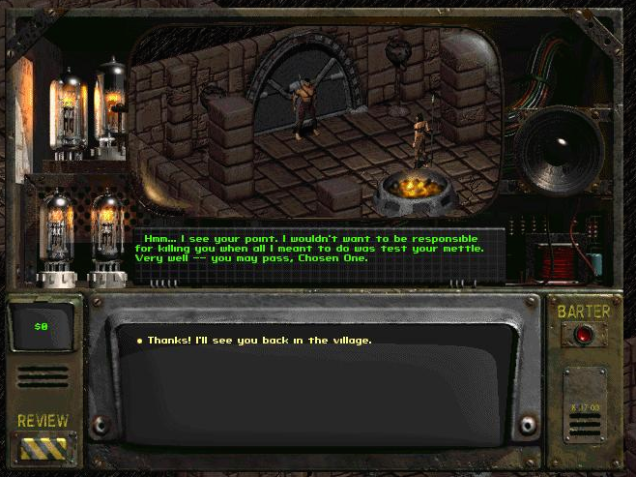 More clarity in terms of what skills and stats actually mean would also be good. I don't think written or video descriptions cut it, either. The process needs to be more hands-on. Maybe some kind of test room where you can try different basic configurations against various enemy types would be good. Admittedly that's only feeding into the obsessive tendencies of folks like me, but it's still better than having to scour the Internet for information that might still prove unreliable.

Also for the record I don't actually hate making new characters—just elements of it. Starting a new game can be daunting, but it's also the moment of greatest possibility. Who knows what you're going to encounter? Who knows what your character will evolve into? It's exciting, even if, like me, you can't keep your mind off all the nitty gritty details. So here's to fresh starts and trying new things. Just know that doing so might take me a little longer than most people.