If Zelda making its first appearance in Mario Kart wasn't exciting enough, Nintendo sweetened the deal today. When Link (if that is his real name) arrives in Mario Kart 8 next month, the company said he'll be bringing a new kart-friendly version of his trusty steed with him.

Nintendo (sort of) revealed the Zelda-themed ride today in a message from the Nintendo of America Twitter account. It's called the "Master Cycle," and while NOA only provided fans with a sketch, they promised it'll have "plenty of horse power." 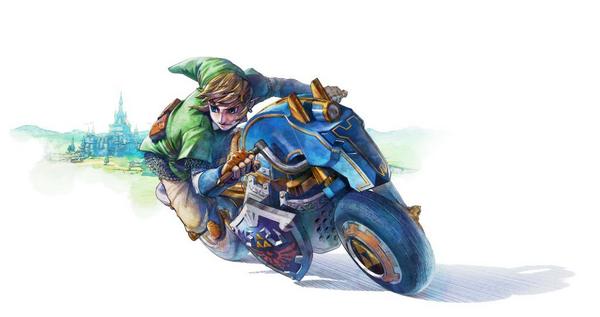 The Master Cycle is part of the first DLC pack for #MK8 and has plenty of horse power. pic.twitter.com/FbrW7r977R

Har har har. Now if they'd just add the buddy system from Double Dash into Mario Kart 8 like they hinted they might, we'd have a regular horse-and-buggy! Ok, I'll stop now I promise.

It's worth noting that while Link's new bike is only the second Zelda-related thing that Nintendo's confirmed for Mario Kart 8, they've also left players with a big hint about similarly themed racetracks, or even an entire cup:

...meaning that Zelda fans might finally get a chance to revel in Nintendo's self-referential glory the same way Yoshi believers have been able to for a while now by racing with Yoshi, on a Yoshi Bike, through Yoshi's Valley.