The Borderlands Gun No One Can Figure Out How to Use

The Sword In The Stone, 87 bazillion gun moon explosion edition.

Spoiler alert! Turn back lest ye be devoured by the sarlacc spoiler pit of planet Zephendel XII.

Borderlands: The Pre-Sequel's most talked about gun is one nobody's using. Yet. The legendary weapon is called the Excalibastard, and here's a YouTuber named ZiggyD admiring its sensual curves and the sexy, sexy slab of mottled rock it's stuck in.

GameFront has handily made a video of how to find it.

Short version is, go to Triton Flats and head toward Stanton's Liver. You'll reach a bridge, but instead of crossing it turn left. Hop across the cliffs and eventually you'll come upon the proverbial gunsword hovering gently above the stone.

Now the problem: no one can actually draw the Excalibastard from its craggy sheath at the moment. Nobody is entirely sure how to do it either, but the stubborn weapon's inscription reads "Art Thou Badass Enough", possibly implying that ability to draw it is tied to players' badass rank. That's what players on Steam and Reddit are speculating, anyway: 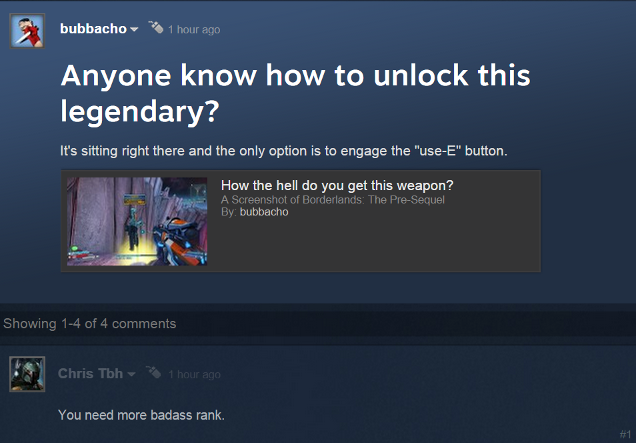 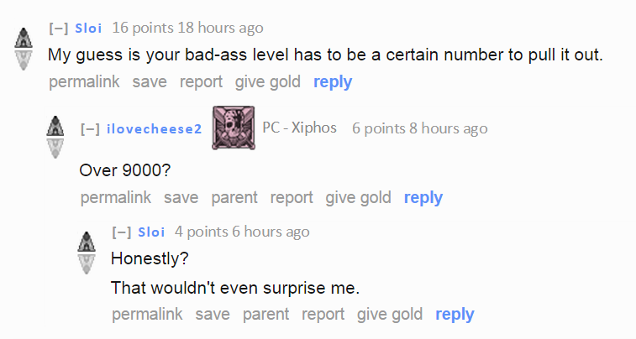 You can increase your badass rank by completing specific challenges, many of which are determined by your class.

I suppose we'll finally understand how exactly this all works when somebody finally draws the damn thing. Until then, more Arthurian Legends in wacky moon shooters, please. Like... like... a Holy Grail that grants laser immortality! Which is like normal immorality except you're instantly and painfully incinerated.