Famitsu reports that during its first week on sale (which is, in reality, last Saturday and Sunday), a total of 233,483 New Nintendo 3DS units went on sale. That breaks down to 61,151 New Nintendo 3DS handhelds and 172,332 New Nintendo 3DS XL handhelds. Obviously, Japan prefers the XL. Above you can see the two new handhelds in a Sankei Photo at an Osaka retailer.

And below, you can see how the New Nintendo 3DS XL compares with the Nintendo 3DS XL. Note that the screens are the same size (however, the regular-sized NN3DS has a bigger screen than the Nintendo 3DS). Also, the XL, which is called "LL" in Japan, does not have removable faceplates. 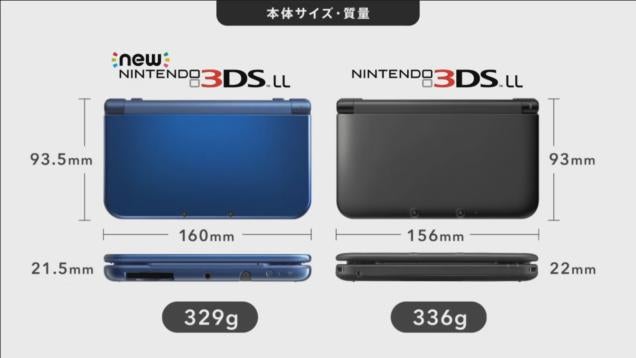 It's worth noting that Nintendo also released a special New Nintendo 3DS XL bundle with Monster Hunter 4G, which probably bumped those XL numbers quite a bit. But, for now, bigger is better. At least for the NN3DS XL.