One of the Worst Pokémon Games is Getting Remade, And It Looks Good

If we absolutely had to pick the worst Pokémon game, I wouldn't blame anyone for putting Pokémon Ruby and Sapphire high on the list. Don't get me wrong: I love those games to death, they defined a chunk of my childhood. But looking back, even I can admit that Ruby and Sapphire aren't exactly the best entries in the franchise.

The Pokémon selection was very poor in those games. Hoenn, the setting for Ruby and Sapphire, is no Kanto. Your rivals in Ruby and Sapphire don't hold a candle to Blue, your rival in the original games, either. But regardless of how many shaky elements of Ruby and Sapphire we list, the fact remains that these games are getting remade for the 3DS. Based on a chat that I had last week with Junichi Masuda, producer of Omega Ruby and Alpha Sapphire, and Shigeru Ohmori, planning director on the remakes, the Game Freak development team seems genuinely confident in the games, a sentiment that seemed to ring true for me when I got to play them.

While I didn't get very far in my demo, I did get to play up to the first town with a gym, Petalburg City. This was enough to give me a taste of what the remakes bring to the table. Most notably, I got to see first-hand how the entire game has been remade with the Pokémon X & Y engine. Graphics aren't everything of course, but boy does the game pop when updated like this:

The new character models work wonders for convincing you that even ugly Pokémon, like Luvdisc, deserve to be in your party too. This alone mediates the fact that the original games didn't have the best Pokémon selection. It also helps that the remakes introduce a new mechanic that make Pokémon you catch feel extra special. Players now have the ability to scan the area for unique Pokémon—and, should you happen to find a patch of rustling grass, you'll be given the chance to sneak up on a Pokémon to catch it, like so:

The mechanic makes use of the circlepad, which allows players to walk or run at different speeds — or, in this case, even tip toe. While it's extra work, you'll want to catch Pokémon like this if you have the chance. Anything you nab this way is more likely to have better stats, if not special moves. One Poochyena that I caught via tiptoeing early in the game, for example, came equipped with a move called "Fire Fang". Normally, the only way Poochyena can learn this move is through breeding—but here, Poochyena just knew the move naturally, making it better than the average Poochyena caught in the wild. Tiptoeing is the sort of mechanic that made me go around wanting to catch every Pokémon, even if I didn't necessarily want to use it—I was just so curious about what special moves a Pokémon might come equipped with. For the record: I found a Lotad with the move Fake Out, and a Zigzagoon with Charm (which was listed as a fairy move, in case you were wondering about whether or not fairies would make a return). Again, with both of these, they were moves that the monsters wouldn't normally know unless I caught them via tiptoeing.

The remakes are full of smaller details like this. You'll notice that the grass sways in the wind, or that trainers are introduced with a special illustration at the start of battle. Heck, at the start of the game, depending on what gender you pick, the Pokémon plushie in your room is different: the girl gets a Lapras, whereas the boy gets a Snorlax. The game also comes with a variety of map improvements, which let you look at what trainers are located on what routes, whether or not you've caught every Pokémon in every route, and the ability to simply tap on a route to fly there.

There are more big picture things to be excited about too, of course. We're seeing the return of megas, and while plenty do the admirable job of making cool Pokémon even neater, the introduction of mega Slowbro shows that Game Freak is definitely willing to have some fun with the mechanic, too. You might recall mega Slowbro being the doofiest mega evolution yet.

"The design was originally my idea," Shigeru Ohmori said. "Actually, with Slowbro, the fact the tail is being bitten is actually the source of its power — so the idea being that, if it was being eaten even more, then perhaps it could bring out even more power. Slowbro itself isn't changing. The thing that's actually mega evolving is Cloyster. I worked with the graphic designers to come up with a cool design that would surprise players, and that was a lot of fun."

And we can't forget about primal reversion, a form of mega evolution that allows Pokémon like Kyogre and Groudon to revert into more powerful prehistoric forms. Masuda and Ohmori were silent on whether or not this mechanic meant we'd be able to revert fossil Pokémon to more ancient forms too, but for now it seems clear that primal reversion allows the remakes to tell a new story with the legendaries they feature on the cover. Much of the point of the remakes, I was told, was to try to find the secret behind the new mega evolutions.

Contests, meanwhile, may not add anything to the battles in Pokémon, but I personally think they're a great distraction. Pokémon Amie proves that we're more than willing to virtually pet our pocket monsters. Why wouldn't we want to gussy them up and show them off too, as contests allow us to do? Contests are a natural addition to the franchise, which return in this game — and that's great, because the new engine means we can show off our beautiful Pokémon better than ever before.

I just wish that Alpha and Omega let us dress up more Pokémon than just Pikachu. Maybe one day we'll be able to dress more Pokémon up as little rockstars or nerds, but for now they're limiting this mechanic to Pikachu, as it is the most iconic Pokémon of them all. I imagine that the prospect of creating articles of clothing that would fit a Charizard just as well as they do a Wailord might be a bit of a logistical nightmare, so the move makes sense.

Finally, we have the inclusion of secret bases, which allow players to decorate a hidden space, Animal Crossing style. Look at this: 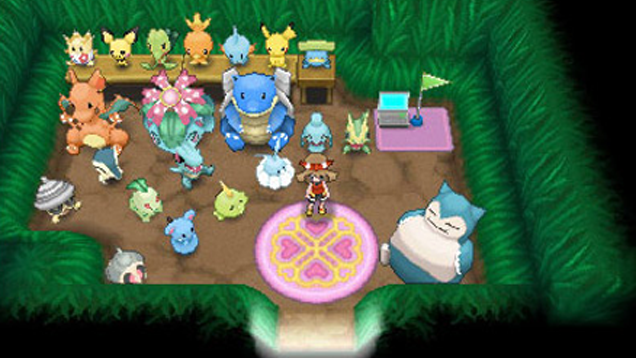 Do you not want to collect every single Pokémon plushie in existence? Are you not driven into stupor by how cute the prospect of collecting Pokémon plushies is? Is that just me? OK, well, even if you're not giddy about the idea of Pokémon Feng shui, one of the most promising elements of secret bases is that battles can be conducted inside your base, which allows you to basically create your own Pokémon gym where friends and players around the world alike can challenge you. You can even set your mini-gym up with your own puzzles and rules, if you'd like.

Pokémon dress-up could be its own game. Pokémon Gym Leader RPG could be its own game. All of these exciting things are folded into a single, already solid game, which makes it easy for me to feel like the upcoming remakes are one of the most exciting entries in the franchise yet, despite being based on one of the weakest Pokémon games. Then again, being arguably the worst Pokémon game is like being a bad slice of pizza. You're still eating pizza, and that's still great. I realise this is a somewhat silly metaphor.

Pokémon Alpha Sapphire and Omega Ruby release on November 28th for the 3DS. Before that, there will be a special demo for the game on the e-shop—and it'll include stuff that players can import into the main game once that releases, such as special Pokémon. We'll update you on the specifics of that once we know more. For now, stay tuned as we bring you more from our interview with Masuda and Ohmori later in the week.

Ghost of Tsushima's Kurosawa Tribute is More Than Skin Deep