NBA 2K15 has got off to a shaky start. Since the game launched two days ago, players have been reporting ongoing problems with many different aspects of the game's performance—everything from the stability of its online multiplayer to losing progress and acquired in single-player.

NBA 2K15 publisher 2K Games has been quick to respond to many of these performance issues and issue regular status updates through several online channels. But it looks like the company is having trouble keeping up with the sheer volume of player complaints. A handful of players who purchased the game on the Xbox One, PS4, and PC told Kotaku today that they haven't heard anything from the company's customer service channels despite putting their complaints through more than a day ago.

Last year's NBA 2K14 also suffered a bit of a rocky launch, so server outages and faulty online connections aren't surprising for some veteran fans of the popular basketball series. But part of the issue that NBA 2K15 players conveyed to me today is that they're having trouble communicating with 2K in the first place. Similar to the situation some players faced with Destiny during its launch, 2K doesn't provide any dedicated phone line for people to contact. Many frustrated players have therefore taken to Twitter to take issue with the @2KSupport channel specifically. At any given moment today, the account's mentions look something like this: 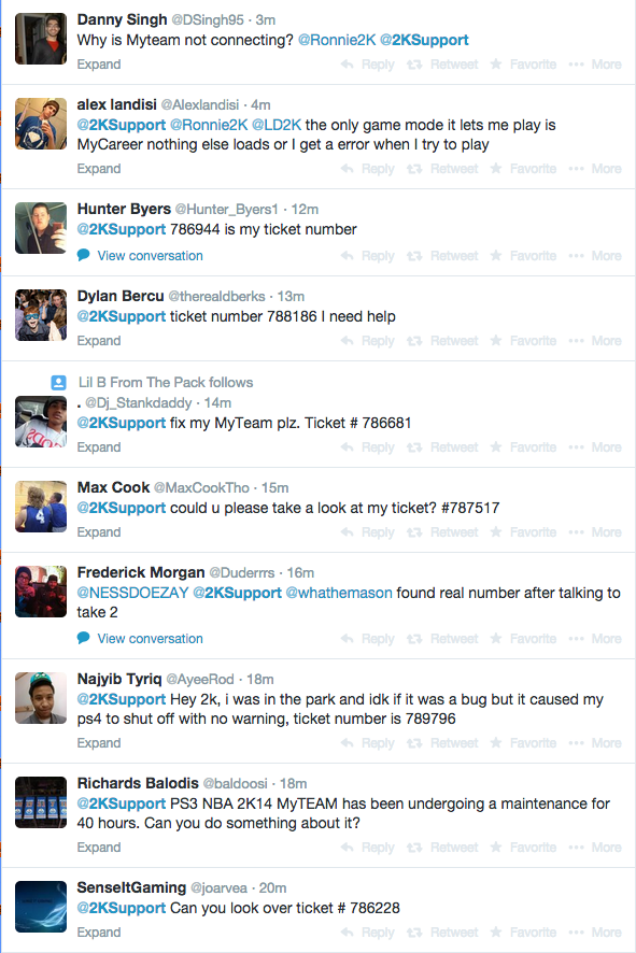 What are the problems players are having with the new game, exactly? A few different ones stand out. First and foremost, people are having a hard time getting online. After addressing several specific outages on its @2KSupport Twitter feed, 2K created a new landing page on the game's website just to offer ongoing updates about the status of the game's servers on its respective platforms. As of this writing, the Xbox One, PS4, and PC versions are all listed as experiencing "temporary service interruptions that may affect various game modes." The Xbox 360 and PS3 versions, meanwhile, are both listed as facing complete service outages.

On top of the online connectivity problems, some players are also saying they haven't received additional in-game material such as player cards that they purchased or received vouchers for as a pre-order bonus. That, or the extra stuff will just vanish without at a trace at a certain point. Some of these missing features, such as missing face scans and other customizable material, has been addressed for certain versions of the game. Yesterday, for instance, the company tweeted to say that it had sorted out lost face scans and custom player names for the Xbox One and PS4 versions of the game.

The #NBA2K15 issue with losing face scans and names of your MyPLAYER has now been addressed for PS4 and Xbox One.

Some of the other stuff that's gone missing has yet to be found, however. And while certain things like facial scans can be redone relatively painlessly, other disappearing features are much more difficult to replace. One of the biggest issues I was told about, for instance, concerned players losing certain player cards from the game's "MyTeam" mode. For the uninitiated, MyTeamis a game mode where you can build a custom team made up of select NBA players regardless of their real-world affiliations. These cards can be acquired through gameplay or as a standalone purchase. Here's how one Xbox One player who spent an additional $70 on the cards described its importance to me:

MyTeam is a game mode where you "collect" current NBA players as cards and make your own team to compete against other players (in Road To The Playoffs and some Challenges) and against the computer (in other Challenges and Domination modes). I earned cards through playing as well as bought cards with real money. Losing that is frustrating, and poor communication from 2k makes it more frustrating. It's a loss of progress, value, and money.

The player told me that he filed a complaint through 2K's customer service channels this morning ("filing tickets about server downtime seemed pointless," he added) and has yet to hear back besides receiving a ticket number. Given that he spent an extra £50 and several hours to acquire his cards only to see them disappear all of a sudden, he's probably feeling a tad impatient. Many other players stuck in a similar situation have tweeted at the @2KSupport account with their customer service ticket numbers.

NBA 2K15's performance issues are especially frustrating because, and the game's many positive reviews have suggested, it's a really great game that brings a lot of welcome improvements to the series—when it's running properly. Players who've been able to access the game in a stable form seem to agree. One comment in a thread on the NBA 2K subreddit from early this afternoon summed up this conflicted sentiment: "The actual game mechanics/physics are excellent," a PS4 player wrote. "Too bad the servers are shit so that we can't utilize the good gameplay online in MyTeam or MyPark."