We normally think of game ratings as little more than a useful marker of where we'll be able to buy a game, or whether or not it's suitable for children. But oh, let me tell you: ESRB literature can be so, so much more than that.

The Entertainment Software Ratings Board's website provides detailed rundowns of most of the season's upcoming games at this point, all of which come with hilariously straight-faced descriptions of the more...off-colour scenes you might come across when being gored by a Xenomorph in Alien: Isolation. Or doing pretty much anything in Far Cry 4. Here are some of the best I found. Enjoy. 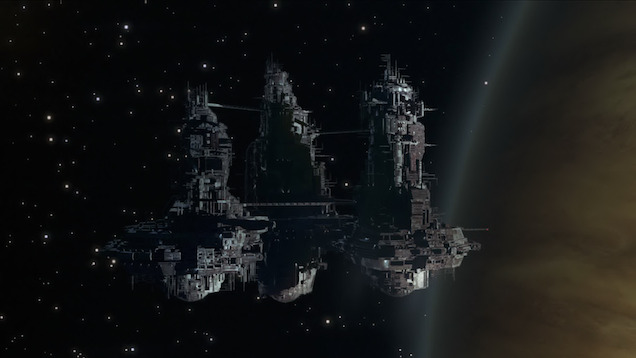 This is an action-adventure game in which players assume the role of Amanda Ripley as she investigates a mysterious space station. From a first-person perspective, players explore the station's rooms and corridors and use shotguns, pistols, bombs, and flamethrowers to kill alien creatures; androids can be dispatched by being shot, set on fire, or blown up. When Ripley is spotted by an alien, a short cutscene depicts her getting knocked down and bitten in the face, or stabbed through the chest with a spike. Blood is depicted when players are impaled; several corpses can be seen lying in pools of blood during the course of the game. The words "f**k," and "sh*t" appear in the dialogue.

You know what they say: "In space, no one can here you scream 'Holy f**k that's an alien!'"

This is a first-person shooter in which players assume the role of a warrior battling demons in modern Japan. Players use a variety of swords, firearms (e.g., machine guns, shotguns, rocket launchers), and throwing weapons to kill waves of demons and gangsters while searching for mystical items. During the frenetic combat, players frequently shoot and slash enemies, severing their heads and limbs; large blood-splatter effects also occur during these sequences. Combat is highlighted by frequent cries of pain, blood and dismemberment effects, and realistic gunfire. Some segments of the game contain sexually suggestive humour (e.g., "Having sex is like playing bridge. If you don't have a good partner, you'd better have a great hand"; "Guess I was just too much Wang for them to handle"; "Easy to get… chlamydia & syphilis, report unlicensed prostitution."). The words "f**k," "sh*t," and "a**ehole" appear in the dialogue.

I guess the shooting is to be expected. But slashing?? For shame, video games.

Once again, it sounds like the next Far Cry is shaping up to be a lot like the last one...

This is a first-person shooter in which players assume the role of a man (Ajay Ghale) returning to his ancestral home to spread his mother's ashes. Players engage in a variety of frenetic combat missions and use machine guns, pistols, shotguns, knives, and explosives to kill enemy fighters amid mountainous environments. Players can also perform stealth attacks (i.e., sneaking up on enemies and slitting throats/stabbing chests). Battles are highlighted by screams of pain, realistic gunfire, and large blood-splatter effects. Some levels/cutscenes depict further violence: characters tortured via electrocution, stabbed repeatedly in the neck, executed with bladed weapons. The game includes some sexual/suggestive material, including dialogue referencing sexual activity (e.g., "The army forces us to take drugs and then gives us more if we do sex for wealthy men"; "Some of the people in my village, the army forced them to become prostitutes"; "I think sex is fun;" "[I] was with this girl and she was into some crazy S&M. . ."). In one battle sequence, a man's genitals are briefly exposed while falling/being attacked. During the course of the game, two characters are depicted smoking marijuana; players' character also consumes the drug, resulting in blurred-screen effects and occasional hallucinations. The words "f**k," "sh*t," and "a**ehole" appear in the dialogue.

This is a third-person shooter in which players assume the role of a young survivor battling through a mutant apocalypse. As players traverse the open-world of Sunset City, they use assault rifles and fantastical weapons (e.g., grenade launchers that shoot teddy-bear bombs, guns that shoot fireworks) to kill mutant creatures, robots, and occasional human enemies. Combat is highlighted by frequent explosions, screams of pain, and gunfire. Some explosives cause enemies to be dismembered, leaving limbs around the environment; one cutscene briefly depicts a character's head cut off by a mutant. During the course of the game, characters and environmental elements reference sexual behaviour or humour (e.g., "Oh, such a bold statement! It says, 'I am a prostitute!'" and "How hard was it to make a porn flip book?" ); a radio ad contains a running joke about a sex burger (e.g., "It's so good you won't be able to contain your urges to rub it all over your Sex…Burger"). The dialogue contains a handful of drug references (e.g., "You guys have been eating weed" and "Oh, when I get back with your drugs, we'll discuss my offence at your assumption that I would know where to find drugs"). The words "f**k" and "sh*t" also appear in dialogue.

Ah, the "sex burger." That's where they always get you.

Not gonna lie, I expected the Civ game to be the most...polite game on this list. Colour me pleasantly surprised!

This is a strategy game in which players manage a colony on distant planets. Players can manage their colonies' economic and technological development, engage in diplomacy and trade, and expand territory through military conquests. Combat is depicted from an overhead perspective, as military units (e.g., small armies of soldiers and vehicles) do battle against alien creatures on a gridded map. Battles include brief animations of gun fights; realistic gunfire and mild explosions can be heard throughout the game. The game contains references to alcohol in text (e.g., "The secret of being happy is to delight in the absurd, repress the irritating, and keep good wine close at hand" and "A glass of wine first?"). The word "bastard" also appears in the text.

The exact opposite goes for Bayonetta:

This is an action game in which players assume the role of an ancient witch that battles angels and demons in a fantasy world. Players use hand-to-hand combat, pistols, giant scythes, axes, and magic to kill enemy creatures. Players can also perform various finishing moves, which depict exaggerated and intense acts of violence: enemies thrown into spinning spiked wheels; characters decapitated by a guillotine; a dragon ripping characters apart—large blood-splatter effects and gore can be seen frequently. During the course of the game, some female characters perform suggestive taunts and poses (e.g., opening their legs, dancing on poles); outfits are occasionally shed during battle, with characters' breasts and buttocks partially exposed. The words "f**k" and "sh*t" appear in the dialogue.

This is a racing simulation game in which players drive real world cars around international race tracks. Players can compete in variety of race series, time trials, and drift challenges.

Nope, I was wrong:

This is a racing game in which players assume the role of Alex, a wrongly convicted man attempting to expose corruption and avenge his brother's murder. The majority of gameplay involves players racing cars around landscapes in traditional contests of speed; there are also several chase missions and jump, slalom, and evasion challenges. Takedown missions prompt players to ram into other vehicles, eventually causing targets to crash. Cutscenes depict more dramatic instances of violence: a man fatally shot; a bloodstain on his shirt is briefly depicted. The game includes some suggestive material: Alex watching a woman in a short skirt; the camera briefly lingers on her posterior as she walks by. The dialogue also contains some suggestive content (e.g., "[I] hooked up with his wife"; "You hitting that? Mind if I take a run at it?; "There was this one chick, she was so freaky…"). The words "sh*t" and "a**ehole" appear in dialogue.

All those poor "robot-like entities..."

This is a survival-horror action game in which players assume the role of a police detective investigating murders at an insane asylum. As players investigate and explore the mysterious environments, they use knives, pistols, shotguns, and explosives to kill human-like creatures and monsters. The frenetic combat is accompanied by screams of pain and realistic gunfire. Some attacks result in impalement and dismemberment/decapitation, with large blood-splatter effects; some environments also depict blood-splattered floors and mutilated bodies with exposed organs/viscera. Cutscenes also depict intense acts of violence: young characters burned alive; a man decapitated by a guillotine. The words "f**k" and "sh*t" can be heard in the dialogue.

I'm actually pretty relieved about this one. I mean, how lame would it be if there wasn't "exposed organs/viscera."

This is an action-adventure game in which players assume the role of Arno Dorian, a man who joins the Assassins Brotherhood in 18th century France. As players follow the storyline, they undertake missions to find, stalk, and kill human enemies. Players use swords, muskets, concealed spikes, and poisonous blades to assassinate characters. Players can also engage in swordfights with armed soldiers, often resulting in characters getting impaled. Cutscenes sometimes depict civilians getting stabbed, burned at the stake, and decapitated by guillotine. Severed heads are occasionally depicted on spikes or held up in the air. The game includes some sexual material: missions referencing brothels, prostitutes; dialogue also includes sexual remarks (e.g., "Add some bestiality and a lecherous priest and I'd say you have the beginnings of a beautiful novel"; "Seven nuns seducing a parish priest into debauchery, or an enormously-endowed Benedictine sodomizing a goat named Pius?"). During the course of the game, players are sent on flashback quest to retrieve wine; while playing these memories, the camera wobbles to simulate drunkenness. The words "f**k" and "sh*t" appear in the dialogue.

I know, I know: I can't wait to see how this line about nuns seducing priests works its way into the new Assassin's Creed game. But also: I just want to point out that the ESRB makes it sound like guillotines will play a more central role, gameplay-wise, in The Evil Within than they will in...the game set during the French Revolution?

I am confused. Maybe I should stop embarking on so many flashback quests to retrieve wine.