The World Cup of Iffy Japanese and Chinese Tattoos

Some of the best athletes in the world are facing off at this year's World Cup. Shame that a couple of them are sporting some rather interesting, if not unfortunate, Japanese and Chinese tattoos.

Previously, Kotaku profiled the perplexing tattoo of Greece's Theofanis Gekas that was baffling people in Japan. As noted on Mixi News, there are other tattoos that have people in Asia shaking their heads as well. Let's have a look!

Eden Hazard, who plays on the Belgian national team, got a Japanese katakana tattoo on his ribs, which reads, ジャンニス ("Jannisu," which could be written as "Jannis" in Roman letters). The tattoo is to honour his son, who is named Yannis, not Jannis. The "ja" (ジャ) characters were inserted instead of the correct "ya" (ヤ) character.

Granted, something might have been lost in translation or pronunciation, but as Weblio points out the correct way to write Yannis in Japanese is ヤンニス, not ジャンニス. And since that tattoo is in another language, it's important to factor in how those speakers will read it. So now, Japanese football fans are left wondering: who's this Jannis? It seems like a spelling mistake. 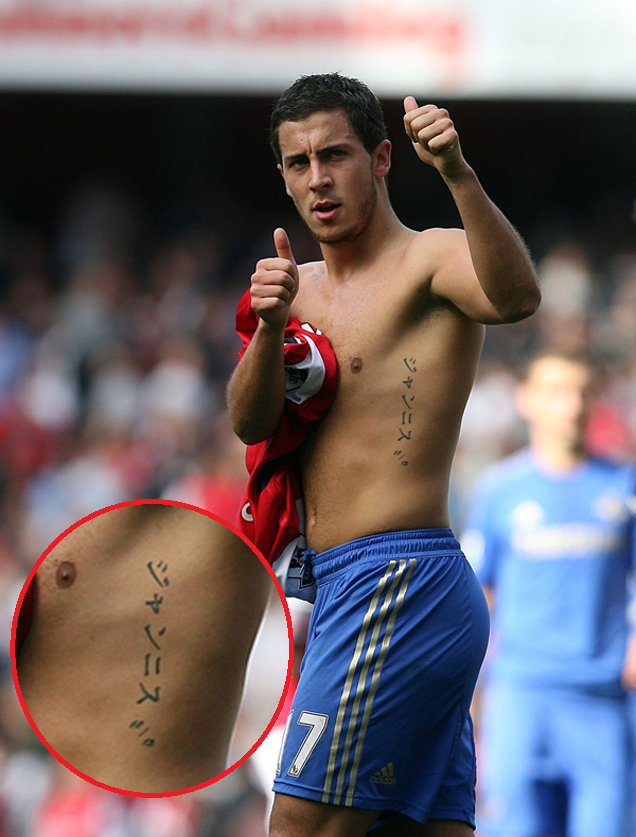 Below, you can see Fredy Guarín. He is a great player, representing Columbia at the World Cup. When he faces off against Japan in tomorrow's game, fans might notice the tattoo on his arm.

It reads, 丹尼宗, which doesn't make much sense! In Chinese, 丹 is "dan" and refers to a pellet. It's a common character in Chinese names. The character 尼 (ni) is phonetic and is the first part of the word for "nun" in Chinese, which is "ni gu" (尼姑). Finally, there is 宗, which can be the surname "Zong." So, as Kotaku's Beijing-based reporter Eric Jou points out, the tattoo could basically be read phonetically as "Danny Zong." Fredy Guarín. Danny Zong. Whichever! 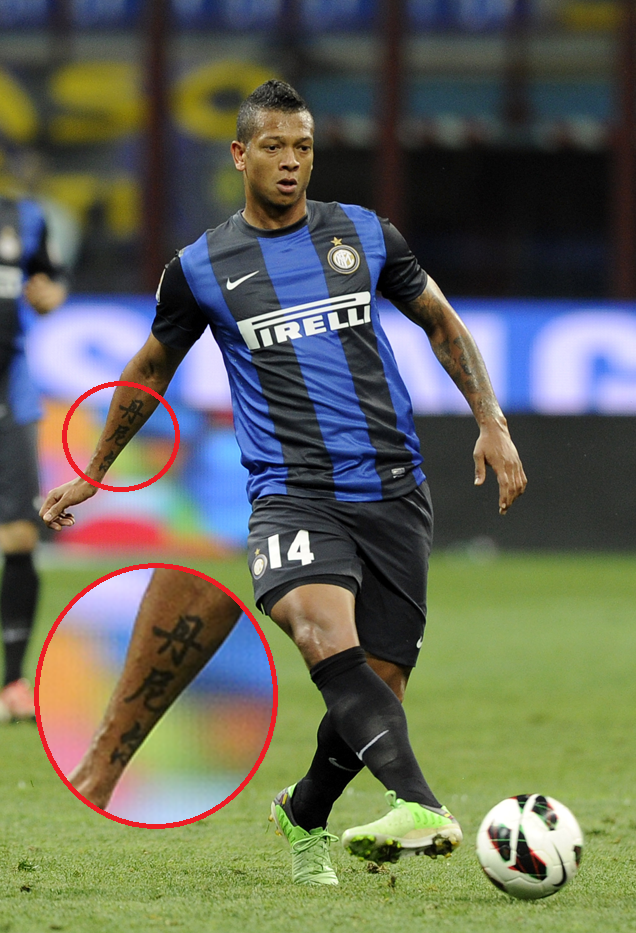 According to Chinese football site Ballpo.com, the phonetic way to write his name in Chinese is 弗雷迪-瓜林 or "Fei lei de - Gu Lin." So Danny Zong is close. Eh, not really. It's unclear what this tattoo means and whether or not it's actually supposed to be his name. Maybe it's a friend's name. Or a stranger's name. Who knows.

In Japanese, the characters are equally perplexing. The character 丹 (ni) can refer to "red earth" or "vermillion," while 尼 (ama) refers to a nun just as it does in Chinese. Finally, the character 宗 (shuu) refers to a "sect," as in a Buddhist sect. The character can also mean "doctrine" or "root." As Mixi News points out, the meaning is completely ambiguous to Japanese people. Hopefully Guarín knows what it means, or at least, what he thinks it means.

As noted recently on Naver, there are other footballers who currently are not in the World Cup, but whom have interesting tattoos. They are in the World Cup of strange tattoos.

Here is Argentine player Diego Galván, which the Japanese hiragana characters あな (Ana) on his chest. That's probably the name of a loved one, but since it's written in hiragana, あな (Ana) looks like it could mean "hole" or refer to a vacancy or someone missing. The characters look incredibly odd juxtaposed with the baby tattoo on the other chest. If he wanted to write the foreign name "Ana," then アナ (Ana), written in katakana would be correct. However, that also refers to "announcers," so that might baffle just as much. How about "Ana" in Roman letters?

That's why if you ever get Chinese or Japanese tattoos, do be aware that millions of people can read them. It's important to be careful when you pick characters, so you don't inadvertently puzzle people. That is, unless that is your goal. Then baffle away.