When not watching one of the most boring World Cup matches in recent memory, Japanese soccer fans were watching the tattoo on the arm of Greece's Theofanis Gekas. The tattoo fail, that is.

As noted on Hachima, the tattoo reads "寒冷殺人魔" (kanrei satsujin ma) in Japanese, which literally translates as "cold murder demon." The problem is that the kanji used here for "cold" (寒冷) refers to weather, as in "chilly" or "frigidity" or "cold" as in a "cold front."

Ironically, this isn't the first time Japan has noticed Gekas's tattoo. The same thing happened in 2010, during the last World Cup. Maybe the country will notice it again during the next one, too! 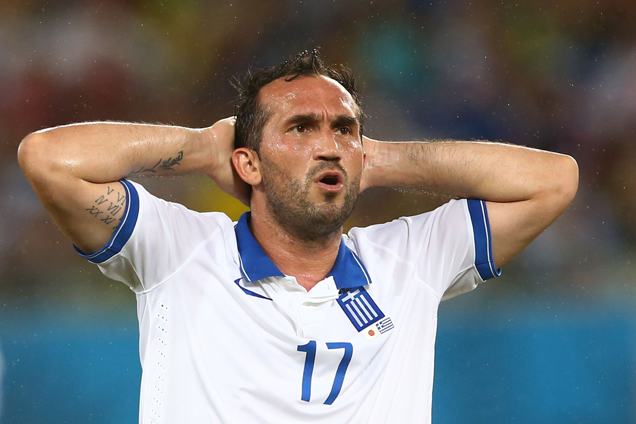 Though, as you can see in this new pic from Getty, Gekas is sticking with his tattoo and hasn't covered it up. Yet.

Sadly, what Gekas has now is hardly badass, and it makes it seem like Gekas is murdering winter weather. Maybe he is! You know, causing global warming, screwing up the climate. If so, then, he is truly to be feared.

No wonder Japanese Twitter users are miffed. But you know what miffed about? Why Japan couldn't score, playing against a team with only ten players on the field. Forget kanji screw ups, now that is truly baffling.