Japan has never been an easy climb for Microsoft's game console. Xbox Japan never seems to catch a break. And this recent E3 tweet shows exactly why.

The tweet from Xbox Japan's official account reads: "Here is the photo spot for Destiny, the latest FPS made by Bungie of Halo fame."

Less than a week later, the game was announced as a PlayStation exclusive in Japan. Ouch! The tweet makes it seem like Xbox Japan didn't know what was coming.

On the 2ch forums and Japanese sites like My Game News Flash, commenters have been drawing attention to the tweet. "Xbox Japan is so incompetent that I'm tearing up," wrote one commenter. "[Xbox Japan] do your jobs," said another.

"It seems like they didn't know at least until the 12th," wrote a commenter. The tweet went up on June 12. 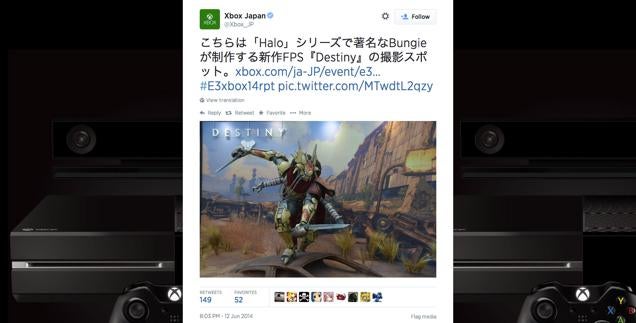 The tweet is amusing some gamers, while appearing to make others glum. "Is there even a reason why Microsoft is releasing the Xbox One in Japan? It probably won't have any multiplatform games."

On the original Xbox Japan tweet, people have started commenting, taking Microsoft to task. "Why isn't Destiny on the Xbox One/Xbox 360 domestically?" asked one Twitter user in Japanese. "You don't have any determination? And yet, morons doing PR."

Another chimed in, "I'm looking forward to this. Of course, I'll be buying the PS4 version."