The One Thing Nintendo Left Out At E3

It has long been a silly and antiquated tradition for video game fans to pledge allegiances to companies, or to declare that any one of those companies has "won" E3. Yet it's also inevitable that every single year at the Video Game Extravaganza in Los Angeles, one or two companies will have a stronger show than the rest. They are The Winners.

This year it was an easy decision: Nintendo had the best show. As Eurogamer's Oli Welsh put it: "Last year, Nintendo's retreat from the annual press conference popularity contest seemed like an admission of defeat. This year, it looked like tactical smarts and forward thinking. Nintendo has come bang up to date."

Indeed, E3's rushed hallway chats and drunken bar conversations were tinged with excitement not just for the Batmobile and Nathan Drake's 1080p stubble, but for quirky surprises like Splatoon and Code Name: STEAM. Microsoft and Sony came out with strong lineups for their new-gen consoles, yet the game that drew the biggest crowds on the floor wasn't Fable Legends or The Order: 1886, it was Super Smash Bros. for the Wii U.

On top of that, Nintendo managed to totally own the digital space by replacing the traditionally uncomfortable two-hour stage show with a clean 47-minute web presentation, full of solid jokes and rapid-fire announcements. Then they put the spotlight on their talented Treehouse staff for a non-stop three-day livestream that got rave reviews from gamers who wanted to vicariously experience the highs and lows of E3. "Treehouse was probably the best thing of it all," wrote one NeoGAF member. "It really felt like you were attending E3 from home."

In the land of "next-gen" graphics and big brown shooters, Nintendo again proved that they can in fact steal a show, with or without third-party support. But there was something missing. There was one big announcement that never came.

On April 17, a Nintendo PR blast triumphantly declared that Super Mario Bros. 3 would be coming to the Virtual Console emulator on Wii U and 3DS. You could now play Nintendo's classic platformer on your new Nintendo systems… assuming you were willing to pay $5 for the privilege. Twice, if you wanted to play it on both consoles. Again, if you lost one of your systems.

It'd be funny if it wasn't so sad. In case you're not keeping track, this new port of SMB3 came a year and a half after the Wii U launched and almost seven years after Super Mario Bros. 3 was released on Virtual Console for Wii.

One look at this sequence of events makes it clear why Wii U owners have been so frustrated by Nintendo's lack of support for retro games. Super Mario Bros. 3, a game that Nintendo should be practically throwing at fans both young and old, took 18 months to make it to new consoles, and nothing about the process has been simple, convenient, or cheap. Instead of just allowing Wii owners to transfer their games over to the Wii U, Nintendo created a clunky Wii emulator (called "Wii Mode") that allowed players to access their old Virtual Console libraries in the most inconvenient fashion possible. Want Super Mario Bros. 3 on your Wii U menu, with GamePad support? Buy it again!

Let's not mince words here: the Virtual Console is a major disappointment. The library is full of holes, the games are expensive, and the lack of unified system support makes buying classic games on the Wii U or 3DS feel like a major gamble—in five years, when we're all moving on to the next Nintendo system, will we have to buy Super Mario Bros. 3 yet again? Will we have to wait another year for Nintendo to re-release it on the next Virtual Console?

One of Nintendo's biggest advantages, as the company likes to brag, is that their library is full of iconic characters like Mario and Donkey Kong. In that area, they can't be beat. Yet the competition has somehow trumped them when it comes to retro services.

When you buy a PlayStation Classic, for example, it's tied to your PlayStation Network account, and you can play it on PSP, Vita, or PlayStation 3. It's easy to download and easy to play. Things are streamlined. And while Sony's PS1 Classics library isn't exactly thorough, they're at least savvy enough to realise that nobody should have to buy the same game twice, and that purchasing classic games should feel worthwhile, not risky.

Meanwhile, Nintendo lets us buy the Game Boy Advance game The Legend of Zelda: The Minish Cap on Wii U but not 3DS, because that would just make too much sense. Somehow, almost two years into the Wii U's lifecycle, its Virtual Console library is even smaller than the Wii's was.

Or, better yet, why haven't they taken the innovative route and created a Netflix-like service where players can pay monthly to access an entire library of Virtual Console classics, from NES to GameCube?

That's what Nintendo needs to spend more time talking about. That's what was missing at E3. I mean, look at this summer's release schedule for Wii U: 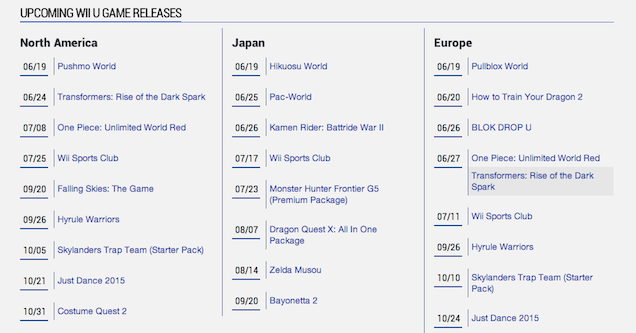 Could things be any drier? Have they just given up on August? Nintendo's 2014 strategy seems to be to tread water with big releases like Smash and Mario Kart 8 in hopes of really building an audience in 2015, when the new Zelda gets us all drooling over the potential of the GamePad.

But, hey, you know what would make for a great stopgap while we wait for bigger Wii U releases? Virtual Console games.

At the show last week, Kotaku boss Stephen Totilo asked Nintendo of America chief Reggie Fils-Aime about the Virtual Console, and his response was rather interesting (bolded emphasis mine):

Our commitment to virtual console is exceptionally strong. We just launched some of the Game Boy Advance games. Those are doing exceptionally well in our market. We've announced the intention to have a DS library of games in the Wii U eShop. We're looking forward to that, so the pipeline is there. I do think what many of your readers don't recognise is there is significant work to take a game that was launched on a previous platform and make it compatible on the current platform, whether we're talking Wii U or 3DS, but we're committed to Virtual Console. I'm fortunate that the Americas are the strongest region in terms of driving Virtual Console sales, so for us it's a vibrant piece of the business.

That's what Nintendo always points out when someone brings up the Virtual Console: how much effort it takes them to emulate these old games. But the gamers who spent hundreds of dollars on Wii Virtual Console games don't really care about those excuses—we care about stable infrastructure. We care about being able to play all of the great first- and third-party games that have come to Nintendo systems over the years. So whether Nintendo needs a better pipeline, more staff, or just some fresh leadership in the Virtual Console department, it's time for something to change.

I mean, it's 2014—why can't I play Skies of Arcadia without digging up my GameCube? Why can't I play Majora's Mask without diving into the clunky nested menus of Wii Mode and disabling my Wii U's GamePad? Nintendo has long hated piracy, but they haven't yet realised that the best way to fight pirates is to create a service that makes it fun and easy to spend money on their games. Just ask Gabe Newell.

I won't pretend to have any idea whether an enhanced Virtual Console could bolster Wii U sales, nor will I ever waste words preaching about how to Save Nintendo From Themselves. You'll never see me telling Nintendo to make games for iOS or PS4. That's a stale, boring, increasingly worthless conversation.

But I do know that with some fixes—a unified account system; a more consistent library; regular sales and bundles; more GamePad support—the Wii U could become a must-own system. Imagine an E3 announcement like that: "Hey, we listened, and we're revamping the Virtual Console. It's gonna be better. We're even gonna add GameCube games."

Then Nintendo would really Win E3.