The figure is supposed to be the version of Nathan Drake made famous by the initial teaser images for the third instalment of Naughty Dog's blockbuster PlayStation franchise.

And it's not bad, aside from the fact that the box contains an evil-looking faux-arachnid. There should be a warning on the outside of the box, but there isn't. 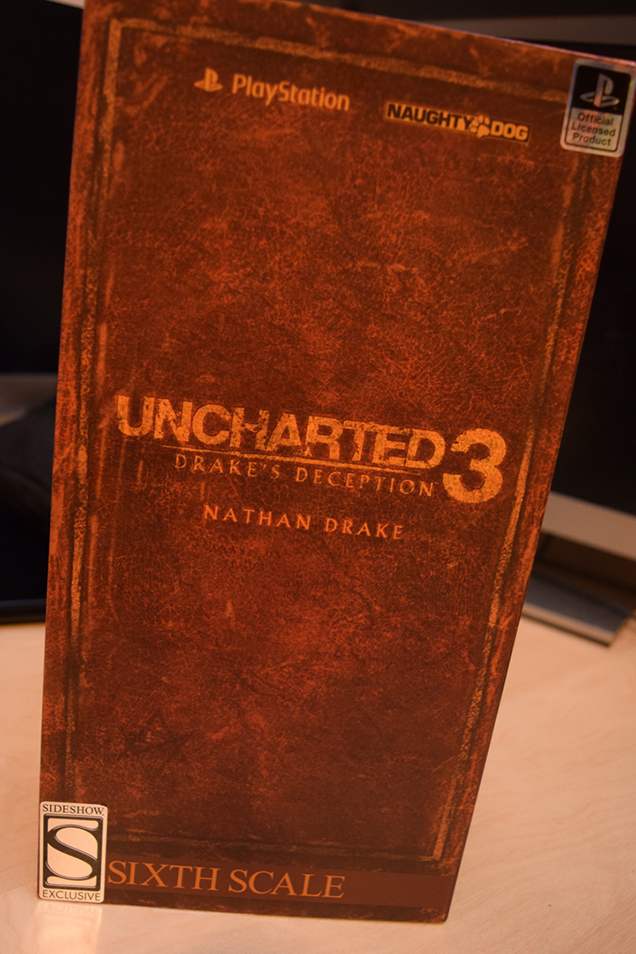 This is what we call a trap.

WHAT'S IN THE BOX?

At first, everything seems completely normal.

But one cannot ignore the hideous legs pooping up from behind Drake's left shoulder for too long.

Here's what included in every box of Nathan Drake-eating Spider Action Figure.

Note that the spider only has six legs. That's because it counts the two on Nathan Drake as its own.

The spider can read maps.

And fire a gun. Freaking spider.

That's Nathan Drake, All Right: Though his appearance and very presence is being subdued by a freakish little spider, Nathan Drake manages to shine through in this figure if I stop thinking about the whole irrational fear thing for a moment.

His face might be a little pudgier than I remember it from the game. Maybe he got bitten. Otherwise, it's as if he stepped off the screen and into the jungle of empty diet soda cans on my desk. Uncharted 4: The Curse Of Fahey's Desk. Has a nice ring to it.

I'd Wear This Outfit: Or I would if I were a great deal shorter and slimmer. The handcrafted shirt, pants and *scrolls up* shemagh are nicely worn and frayed. Check out the sweat stains around the collar of the shirt...

...or the detail on the horseshoe belt buckle.

Sideshow always does an impressive job with clothing, and they say clothes make the man, so here we are.

Guns, Gadgets and Gear: If not for the unavoidable wrist joint, I might mistake this picture for a real person holding a real gun.

The stock folds, the magazine is removable — it's as if Sideshow expects people to actively play with this $159.99 (£95) figure, rather that simply put it on a shelf in an action pose after melting the spider into a small plastic disc.

Strike A Pose: My favourite feature of Sideshow's Sixth Scale line is the pose-ability, because some of us are going to play with our £95 figures instead of just putting them on a shelf. The spider is still getting melted down, though.

The Spider: Did I mention I am an arachnophobe?

Jaundice: While it doesn't come across clearly in the photos, the figure's eyes has a strong yellow tint to the whites.

This is probably done on purpose, perhaps to give him some sort of lost in a sandstorm sort of look. Instead, it makes me question his health. Maybe he shouldn't spend so much time around the you-know-what.

As a Nathan Drake from Uncharted 3: Drakes On A Sandy Plain figure goes, this is one of the best you can get. The detail is amazing, the likeness strong — there is no mistaking this figure for anyone other than Naughty Dog's greatest adventuring hero.

As a spider action figure, it fails completely, because I can't look at it without feeling phantom insects crawling all over my skin and it only has six legs.

The good news is the spider only comes with the premium edition, which is currently sold out. The bad news? Less than 20 of the regular, non-spider edition remain, so if you plan on acting, plan on acting fast.